Phytoplankton! Though, disclaimer, not the actual phytoplankton researched in the Hunter-Cevera et al., 2016 study. Image from here.

When most people think about the impacts of climate change on the world’s oceans, they’re first thoughts are things like ‘corals’ and ‘ocean acidification’. And while these are both excellent examples of how climate change affects the oceans, they’re not the only ones. Science magazine recently published a great article by Hunter-Cevera et al., 2016 about how changing climate, specifically rising ocean temperatures, have important implications for phytoplankton blooms in the Northern Atlantic Ocean.

If you’ve been following UNdertheC for awhile, you probably already know what phytoplankton are, but for you newbies, phytoplankton are tiny organisms that float and live in the ocean. They’re kind of like plants in the sense that they can make their own energy via photosynthesis, but, unlike plants, they live in a three dimensional world and are at the mercy of the ocean currents and the ocean’s physical environment. And this physical environment is changing in response to climate change. Specifically, the ocean is warming. And as the ocean warms, temperatures warm earlier in the spring. It’s this earlier warming in the spring that is having an impact on phytoplankton blooms in the Northern Atlantic ocean. With warmer temperatures earlier in the year, phytoplankton are able to bloom earlier and earlier.

If, however, you removed two M&M’s from the bag per minute but only started to eat one M&M per minute, you are no longer at steady state and would start to accumulate M&M’s. This is one way a phytoplankton bloom can form: more phytoplankton are growing than are being removed. 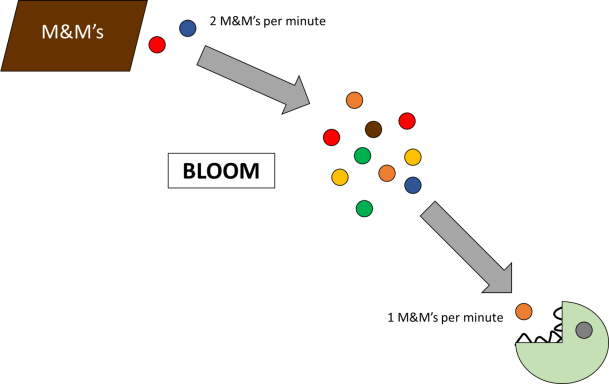 A bloom can also occur when there is more phytoplankton growth compared to phytoplankton removal. This is what is happening in the North Atlantic due to climate change earlier and earlier during the spring.

The way the study figured this out was through a TON of data they collected for 13 years! That’s a long time, but that long time is necessary to understand these long term trends. There is so much variability in day-to-day weather, that in order to understand how climate (which underlies weather and is essentially weather on decades-long time scales) impacts things like phytoplankton production (or even coral growth) you have to study things on very long time scales (13 years, or more!). Science is not an overnight thing but takes years of dedicated patience and persistence, but with this dedicated persistence, you can discover some pretty cool things!