By now you’ve probably seen one of the many articles we have posted about plastics, recycling, and the garbage problem that plagues the world’s oceans (if not, check them out 1, 2, 3, 4, 5, 6, 7). Ocean pollution is obviously an issue that we here are UNdertheC are concerned about. Luckily, we aren’t the only ones.

You may have seen this headline over the past week: “More plastics than fish in oceans by 2050.” A recent report by the Ellen MacArthur Foundation has recently reported that by the year 2050 there will be more plastic in the oceans than fish (measured by weight) unless the status-quo is changed. Is the headline alarmist? Yes, of course. But it does draw attention to a very troubling statistic. The MacArthur Foundation report is extremely thorough and much less alarmist. It can be found here.

Global plastics production has increased 20 fold since the 1960’s and is predicted to increase about 20 times more by 2050. 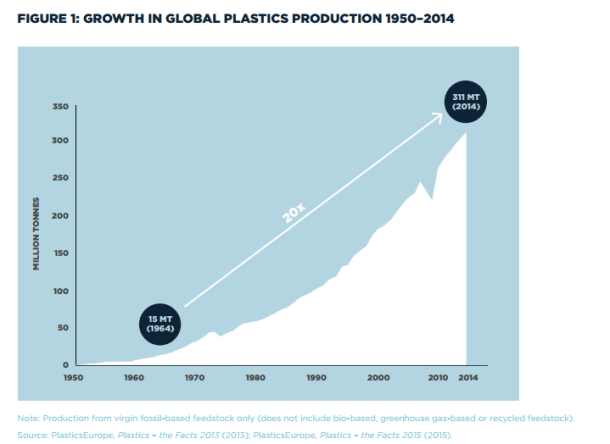 This monumental increase in plastic production has allowed for huge changes in our world. Technology has gotten lighter, more portable, and less expensive. Hygiene has increased, the list goes on. Plastics have essentially changed the world. They are some of the most versatile products on the market today. You would be hard pressed not to come in contact with any plastic products over the course of a normal day (I know because I try).

What happens to the plastic that isn’t recycled (86% of annual production or 67.08 million tonnes)? It all goes to a landfill right? Wrong. Almost 25 tonnes of plastic “leak” into the natural environment every year. Meanwhile, 7.8 million tonnes of plastic are burned to produce energy (the same amount that is collected for recycling each year). Plastics can produce harmful toxins when burned (not to mention CO2). Plastics that leak into the environment can harm organisms through leaching, consumption, or entrapment. Maybe you don’t care about wildlife, but it’s also bad for humans. Especially the ones who eat meat. If the animals we eat have consumed plastic then they will have microplastics in them. Ever heard of microbeads? Those just got banned because they are basically everywhere (especially inside of freshwater lakes and freshwater fish). A recent study from UC Davis revealed that about 25% of the fish sold at markets in Indonesia and California contained human created debris.

Presently we are making plastics and 72% of them are either sitting in a landfill where most of them don’t biodegrade or they are ending up in our oceans (or other ecosystems) where they can cause lasting harm. According to the study (and the logic of most people) we need plastic. We depend on plastic. Removing disposable plastic from your life is not that hard to do if you make a decent income and try hard (I’ve almost done it), but it isn’t possible for some people. It doesn’t look like we can get rid of plastics all together anytime soon. They are simply too valuable.

What can we do to solve this problem?

To answer that first we should examine how plastics are made today.

Plastics are made from one of three sources: coal, crude oil (overwhelming majority), or cellulose. There are many types of plastics (see below) all of which can technically be recycled. However, many/most recycling centers cannot handle some of the higher numbers. 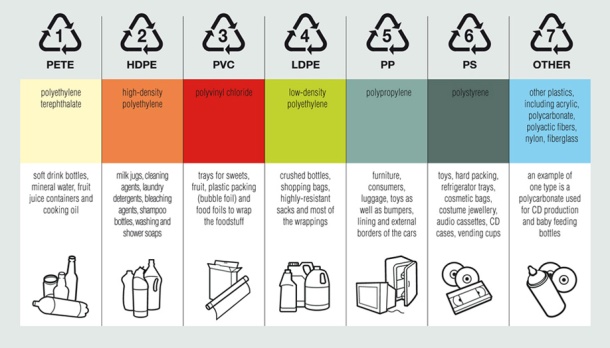 Now, let’s take a look at some possible solutions.

1.) Reduce/ remove petroleum from the equation

Obviously the use of fossil fuels as a source for plastics is a big issue. Many plastics can be recycled, but only if they are able to be collected. We know that only a small portion of plastics are actually recycled (and most are downcycled), so recycling on its own is not a permanent solution (although better recycling can certainly help). Switching raw materials is likely the best option. Using cellulose or some other biodegradable raw material to construct plastics is likely the way of the future. This can create a closed loop system that produces little to no waste. Instead of ending up in the ocean or landfill plastics can be reused, recycled into other products, or composted. This is the biggest recommendation from the MacArthur Foundation report. 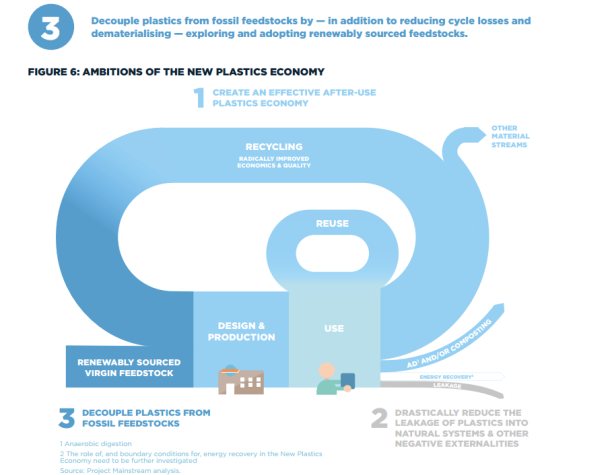 Many people have access to recycling facilities but choose not to use them either because they charge a fee to rent the containers or because they require you to take recycling to a designated drop-off center. In the US about 30% of recyclable products are actually recycled, meaning 70% are thrown out. If everyone had easy curbside no-sort recycling maybe these numbers would increase. Obviously this solution is not feasible for every country, especially those that lack the infrastructure to do such a thing. However, recycling can be improved upon and reuse can be increased greatly by a significant switch from petroleum based plastic to plant based plastic. It is also possible that some microbes will be able to break down plastics that are considered non-biodegradable. This is controversial and more research in needed, but some mealworm gut microbes are apparently able to eat styrofoam.

Taxing or banning single serve plastic options certainly seems like a good idea. If you google around you will find out that this debate is quite heated and many people actually think this won’t help. However, I think it’s a great idea. We can’t make a cultural change without some serious momentum. Plus, it’s just not that hard to find compostable alternatives to the stryofoam container. It’s even easier to get a reusable water bottle. Looking for alternatives to the plastic bag? Try a cloth bag (or make your own). What about produce? You surely must use those little plastic bags for produce, right? No. Try this or just put them directly into your cloth bag.

Bans and taxes on these items have already taken effect in major US cities such as San Francisco and NYC.

4.) Reduce “leakage” into the environment

This may seem obvious, but it’s really very difficult to do on a global scale. 82% of global plastic leakage to the ocean comes form Asia. Many Asian nations have huge population densities and can lack the infrastructure to properly collect waste or recycle. Many small developing nations have the same issue. It becomes difficult to find a place to put the waste and to regulate waste disposal or recycling. Global scale investment in solutions is necessary to solve this problem. However, any effort to reduce or triage leakage will not solve the problem. The only solution that will guarantee anything is switching to bio-benign (harmless) plastics.

Solving the growing plastics problem will depend on a worldwide shift away from fossil fuels and toward renewable materials. This shift is arguably easier for the plastics industry than it is for gasoline or other oil based products. Plant based, biodegradable, and compostable plastics exist now and will continue to be developed thereby greatly reducing needless waste. Ideally this will inspire shifts away from disposable culture or maybe it will just make disposables less hazardous. Either way, it would be a victory.

Again, I encourage you to peruse the entire MacArthur Foundation document here.

2 thoughts on “Fake Plastic Fish: how consumerism ruins the ocean”