Taylor Asher is a PhD student in Marine Sciences at UNC Chapel Hill. Taylor works in Rick Luettich’s lab where his research focuses on hydrodynamics and statistical and physical flood hazards.

As IMS gets back on its feet and Carolina rivers’ waters finally fall, a familiar narrative arises:  If Hurricane Florence, which made landfall as a measly Category 1 storm after weakening from its original Cat. 4 might, can bring such devastation, then it is time to fix or replace the hurricane scale.  But this imperative conflates two related, but distinct problems:  the public’s perceived meaning of the scale and the need to have an accurate, informative “hurricane danger” scale.

The 1-5 hurricane category scale, known as the Saffir-Simpson Hurricane Wind Scale, is simply an indication of the highest winds anywhere in a hurricane.  It was developed by a structural engineer, interested in a simple rating for the damage a hurricane’s winds might do to a building, and is a good measure of this.  Although the National Hurricane Center originally contained storm surge estimates for each category, these were removed in 2009, acknowledging the scale says little of the storm surge or rainfall potential, nor how large of an area might be affected.  So, the Saffir-Simpson Hurricane Wind scale now does exactly what it says.  But that has not fixed its image.

In 1992, Hurricane Andrew slammed into Miami, FL, becoming the 3rd hurricane in 150 years of recorded history to make landfall in the U.S. as a Cat. 5 hurricane, a 20-mile-wide tornado.  This storm helped fix in people’s minds the erroneous idea that the worst part of hurricanes is their winds, a notion unintentionally reinforced by the Saffir-Simpson scale’s use as the principal descriptor of a hurricane.  Hurricane Camille’s arrival in New Orleans in 1969 marked the 2nd Cat. 5 storm on U.S. soil.  Like Andrew, it was also a very small storm, and it tracked just to the east of New Orleans, saving the city from the worst of its >6 meter storm surge, leading to a false sense of security for the city.  36 years later, many residents of the Big Easy chose to stay put as the Cat. 3 Hurricane Katrina approached, believing that the weaker storm posed no threat.  The day after Katrina drowned over three quarters of the city and killed over 1,000 of its inhabitants, Jim Holt of Biloxi remarked that “…Hurricane Camille killed more people yesterday than it did in 1969”.  Reports of the same behavior have come in the wake of Hurricane Florence, leading to the emergency rescue of hundreds of residents that stayed put, rescues which put even more lives at risk.  Is this a limitation of the metrics used to convey danger, or is this a human behavioral problem like survivorship bias, better tackled by careful messaging?

As forecasts for Florence downgraded from a Cat. 4 to a Cat. 1 hurricane, the storm surge forecasts changed little, thanks to one of the factors the Saffir-Simpson scale omits:  As the storm’s peak winds dropped, its size grew, giving the winds more time and area over which to drive ocean water onto land. 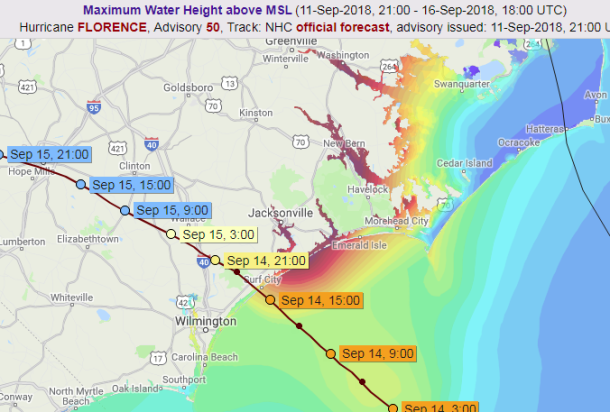 Early forecast with storm as Cat. 3 at landfall.

Later forecast with storm as Cat. 1 at landfall. Both screenshots taken from http://cera.coastalrisk.live/

The storm’s slowing motion also brought prodigious rainfall on top of the already high storm surge.  Residents of Texas are all too familiar with this after 2017’s Hurricane Harvey capriciously meandered around Houston, delivering over a meter of rain.  Reducing to just a few numbers a weather event hundreds of kilometers across that brings heavy winds, rain, storm surge, lightning, and tornadoes is no simple task.  The hazards interact with each other and with the topography of the region, bringing formidable challenges to any simple scale describing the risk.

Hurricane Harvey’s track and rainfall totals throughout Texas and Louisiana. Image from here.

Since the record-breaking 2005 hurricane season, several indices to describe the risk of surge and other factors have been proposed, although none have yet been widely implemented.  These typically use more complete measures of a storm like the Integrated Kinetic Energy or Accumulated Cyclone Energy indices.  And while multi-faceted hazards from storms like Harvey point to limitations in even these more modern approaches, there remains one larger issue:  The “best” description of the danger can be very case-specific.  For a governor to determine whether or not to preemptively issue a disaster declaration (which is done to release emergency funds and other activities), the quantity of interest is the total damage potential across a region.  In this case, a scale that takes in advanced datasets like structure inventories to estimate total damage potential makes sense.  For an individual resident to decide whether or not to evacuate, such a metric is not so helpful.  Different hurricane scales try to communicate fundamentally different concepts, but these are nuances that one cannot and should not expect the public to appreciate.

In the days leading up to Florence, I was asked by several of my fellow graduate students and professors whether they needed to evacuate Chapel Hill.  For them, the danger is certainly not storm surge, and being so far inland with a slowing storm, it’s also most likely not the winds (though I encouraged people to be wary of big trees and poorly-constructed homes).  Instead, it’s rain, whose danger comes down to a few factors, most notably the local topography.  As the name implies, it’s pretty hilly around Chapel Hill.  Rain water reliably flows downhill; those at risk are primarily those in areas where rain concentrates.  This proved correct for Chapel Hill and Florence, though flash flooding and landslides can further complicate this picture, again showing the answer to “What is my risk?” has many subtle, deadly shades.

Flooding in Port Arthur, TX, after Harvey. Image from here.

Things are improving.  Awareness that rain and surge are the real dangers in a hurricane seems to be relatively common, and I even heard a reporter on CNN during Florence point out that the storm’s weakening was being offset by the fact that it was growing larger (I got really excited).  It is clear that new metrics need to be put in public view, and that turning an entire hurricane into just 1 number is probably not the right approach.  But just how much an informed public and scientists’ clever scales can help individual make better decisions is something that only time will tell.

I have a brother living in Charleston, SC, a place at serious risk for both rain- and surge-driven flooding.  He lives on the 3rd floor of a concrete building.  For a hurricane, he is in a relatively protected place in a relatively exposed city.  He’s seen Hurricanes Matthew (2016), Irma (2017), and now Florence all threaten and then largely spare the city.  A mandatory evacuation was ordered for Florence.  My brother stayed behind, and had a relaxing long weekend with barely any bad weather.  I worry he and other residents may become beset by the Camille effect, remembering these more recent storms while forgetting the 20-foot surge Hurricane Hugo delivered just north of Charleston in 1989 and how it could have blighted the city had it tracked just a little further South.  It’s not clear to me how to best inform others of their risk.  Do I tell my brother the truth, that flood waters reaching his 3rd floor apartment would require a storm surge higher than any ever seen in the United States?  Or do I emphasize that no one is safe from massive fires that may be sparked by power outages and lightning?  Providing people with more information can be good, but it can also make them over-confident in the face of dangers they do not realize exist.  My brother and I stayed in contact in the days leading up to each storm, and I haven’t yet told him he needs to leave.  I can only hope that, if I do, he does.