How do we science? / Science / Technology

Satellites hovering hundreds of miles above earth; underwater autonomous vehicles traveling through the ocean; drones collecting snot above whales; and robots that move like fish; what do all of these things have in common (other than sounding like some futuristic world where robots and computers have completely taken over)?? Turns out, all of these things are tools scientists use, today, to help measure the health of our oceans, take samples in remote and often inaccessible places, or observe animal and fish behavior in as un-obtrusive way as possible. They are ways that technology merges with science to allow us to collect a lot of data with (somewhat) less effort.

A lot of these techniques allow scientists to be removed from the data collection: either as being away from where the samples are being taken (as, cozy in a warm room on land while an underwater autonomous vehicle takes samples thousands of miles in the middle of the ocean) or allows for continuous data collection (as in satellites constantly taking measurements of earth from space). No matter how far away the scientist is, it’s a way for us to get valuable data that we wouldn’t otherwise get by just going out into the field and observing what’s happening directly. The motivation for this blog post came from a recent article at NPR that talked about a new robot fish. I’ll describe a few of the different ways technology is being used in science and talk about how scientists are using them to check-out what’s happening in the environment! 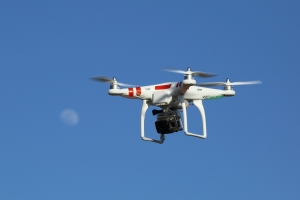 All kinds of sensors can be put on drones to remotely monitor the environment, including cameras. Image from here.

A deep water AUV that’s used to dive to depths that humans can’t survive. Like drones, all kinds of sensors can be attached. Image from here.

Technology is always evolving (think about how much better your new cell phone takes pictures!) and that is certainly true of the technology used in science. As funding becomes tighter and as scientists ask for more information, technology, like the ones described above, will become ever more prevalent. But don’t worry! Even as we put more robots in the ocean, there will still be plenty of data analysis and problems to solve, for us scientists!

Lots of cool technology, comes from lots of different places. A list of some good resources (and labs) using this technology are below:

The MIT lab that developed SoFi

Using drones to collect all kinds of data

An example of how AUV’s can be used