How do we science? / Science

By this point, most of our readers are probably pretty well versed in ocean acidification (just type ‘coral reef’ in the UNdertheC search box and you’ll come up with lots of interesting tidbits about ocean acidification). We know that increasing carbon dioxide in the atmosphere (from human activities, including the burning of fossil fuels) is increasing the amount of carbon dioxide in the ocean’s surface waters (thanks to a little thing called gas exchange) which in turn, results in decreasing pH (if you’re a chemistry nerd, then basically, the carbon dioxide interacts with water and carbonate ions and generates acid). Then, of course, this decrease in pH has all kinds of negative effects on ocean and coastal organisms, especially on corals and other organisms that produce calcium carbonate.

The impacts of ocean acidification on calcium carbonate organisms (in this case, a pterapod shell). The upper left shell had a ‘normal’ pH with decreasing pH from the left to right. Image from here.

That’s all well and good, but a recent paper has brought to the limelight a counter part to ocean acidification: freshwater alkalinization. Okay, that was a lot of ‘A’ words with the suffix ‘-ation’ at the end. We just went over ocean acidification, which leaves freshwater alkalinization. Alkalinization is basically the opposite of acidification, where the pH of freshwater systems has actually been increasing over time. Meaning, that instead of getting more acidic, like the ocean and coastal waters, this paper shows that inland freshwater streams and rivers, are becoming more basic over time. The study found that in addition to increasing the pH of these streams and rivers, the salinity (or how much salt) is also increasing, meaning the freshwater in rivers has been getting saltier over time as well. 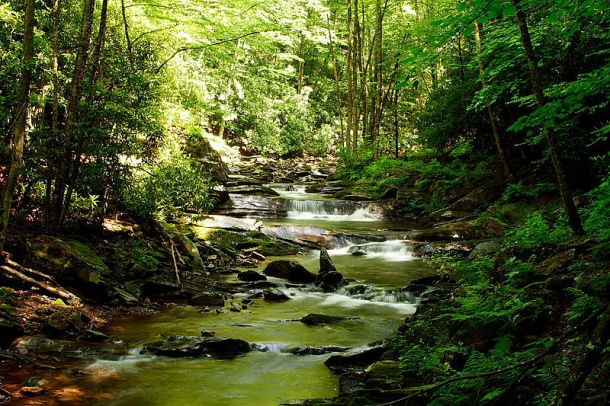 It can be hard to tell by just looking at a stream, but the chemistry of many streams and rivers in the US have been changing over the past 50+ years due to human activity in the watershed. Image from here.

The authors of the study offered a few hypotheses for why the salinity and pH of these freshwater systems is increasing, all of which stem from human activity in the watershed:

This increasing salt and pH in freshwater is really important to the health and the use of these ecosystems. For one, many rivers and streams are used as drinking water sources. As salinity and pH increase, we may no longer be able to use these sources as drinking water or it may become more expensive to treat the water for drinking. Increasing salt and alkalinity can also alter how metals and other contaminants move through the environment. Under normal conditions, a lot of contaminants and metals are filtered out in the soil before being transported to streams and rivers. As salinity and pH change, these same contaminants and metals no longer stick to soils as well, and then end up in freshwater systems where they can harm the environment. And, of course, we all know that all water ends up in the ocean, so eventually this higher salinity, higher pH freshwater enters the ocean. One small benefit of the increasing pH in freshwater may be it’s ability to offset ocean acidification in coastal waters. But this is really a very small benefit (the ocean is still pretty big compared to all the rivers…).

I think what’s so interesting about this study is how it highlights the radically different ways humans impact the environment and further shows how much we don’t know about the impact humans are having on the total environment. From climate change to ocean acidification to now freshwater salinization and alkalinization, humans have to be more mindful about our impact on the environment in order to best preserve the Earth we have.

A good resource for the chemistry of ocean acidification.