Scientists in Action! / The HumanitSEAS

Science grad students are asked terrifying questions on the regular, but the very worst one comes from our moms.  It’s usually tacked onto an otherwise innocent conversation, when Mom will casually pause and say, “Honey, your latest oxygen flux data are truly fascinating!  By the way, have you met anyone lately?”  It’s enough to make you want to change the subject to p-values, or graduation deadlines, or scathing manuscript edits.  You’re in good company though!  Turns out moms have been asking this question for at least a century.

Dr. Ruth Patrick was a pioneering ecologist, but you can bet your dissertation that her mom was concerned about her love life.  According to her New York Times obituary, Patrick “resisted her mother’s wishes that she marry and learn the social graces and decided to study botany instead.”  Things have improved for female scientists since the 1920s; the challenge is now balancing personal and professional lives rather than picking between the two.  But that line in Patrick’s obituary sums up the difficulties faced by early women in science and their dogged refusal to accept the status quo.  Since March is Women’s History Month, there’s no better time to reflect on female scientists of yore whose determination and defiance paved the way for today’s STEM ladies.

Dr. Ruth Patrick in the field, circa 1970. I’m thinking I need a new field hat. Image from http://www.newsworks.org/index.php/local/roxborough/60176-longtime-chestnut-hill-resident-and-famous-ecologist-ruth-patrick-remembered-by-mentee

Not only was Dr. Ruth Patrick a female ecologist, but she was an ecologist before the field even existed.  Natural history was trendy in prior centuries, of course, but the study of connections within the environment wasn’t codified as ecology until the 1960s.  Before that, scientists generally zoomed in on one study area without placing it in a broader context.

Ruth Patrick was a big picture person.  Born in 1907, Patrick had a childhood fascination with the natural world that was encouraged by her father and ultimately led her to earn a PhD in botany from the University of Virginia in 1934.  After graduating, she was hired as the curator of microscopy at Drexel University’s Academy of Natural Sciences in Philadelphia (ANSP), with the slight caveat that, as a female scientist, she would not be paid.  It took seven years for Patrick to make the payroll, but she at least didn’t have to worry about a makeup budget during that time: she was advised not to wear lipstick on the job.

Like our blogger alumus Kelsey, Ruth Patrick’s research passion was diatoms.  Diatoms are unicellular phytoplankton whose silica cell walls give them the intricate structures seen below.  As she studied and cataloged diatoms into what ultimately became the world-renown Diatom Herbarium, Patrick began to suspect that they could provide clues about their environment.  Specifically, she realized that water quality in a stream could be indicated by the number and species composition of diatoms in a water sample.  It would therefore be possible to gauge the level of pollution in a given stream by sampling its diatom community.  As you can likely guess, greater abundance and diversity of diatoms usually translates to a healthier waterway.

This seems like common sense today, which only underlines the influence of Dr. Patrick’s work.  Today’s widely-used Rapid Stream Assessment Technique employs proxies for water quality, such as macroinvertebrate populations and sediment deposition, to efficiently evaluate stream health.  But in Patrick’s day, it was extremely unusual to think in broad ecological terms and to assemble a multidisciplinary team of scientists to do so.  Patrick’s 1948 study of the Conestoga River, PA, is often cited as her major breakthrough in limnology (the study of freshwater science).  Contemporary methods held that a stream could be analyzed by simply assessing its chemistry.  To best study the Conestoga, Patrick brought along not just chemists, but specialists in bacteria, plants, and animals.  Patrick combined the biological and chemical data collected by her team to report on the overall pollution level of the Conestoga.  For the next 25 years, Patrick led the ANSP Limnology Department, which she founded, in stream evaluation efforts across the United States that ultimately set the standard for modern aquatic studies.  The Limnology Department combined the expertise of scientists from multiple disciplines and developed novel equipment, including the diatometer, a device invented by Patrick to collect and analyze diatoms. 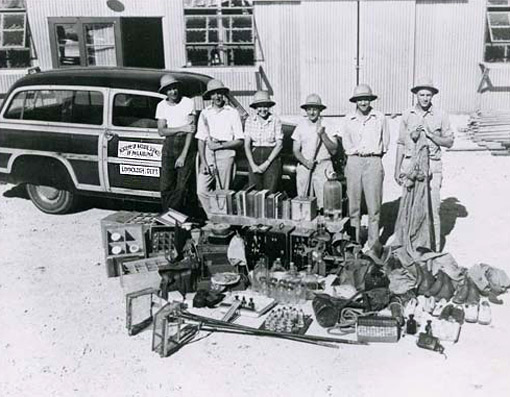 Not to be confused with Indiana Jones! Dr. Ruth Patrick (3rd from left) and her team of scientists survey the Guadalupe River, TX, in 1947. Image from http://www.ansp.org/explore/online-exhibits/stories/the-patrick-principle/

Even if they can’t tell a diatom from a dinosaur, most people have a sense that greater biodiversity = healthier ecosystems.  This concept is known as the Patrick Principle to honor Dr. Ruth Patrick’s recognition of the connection between biodiversity and habitat integrity.  Patrick’s work did not end with stream assessment, however.  “When the environmental crisis began to emerge in the 1970s, she was the dominant figure in the field of water pollution,” ANSP scientist Robert Peck reported in Patrick’s Washington Post obituary.  While continuing her employment at ANSP, Patrick taught courses at UPenn, wrote a number of books on freshwater science, and advised Presidents Johnson and Reagan and companies such as DuPont on environmental issues.  Patrick’s work on aquatic pollution informed the 1972 Clean Water Act in more ways than one: she helped write the legislation.  Between the 1970s and 1990s, Patrick also cleaned up on the awards front, with recognition including the National Medal of Science and election to the National Academy of Sciences.

In what may be the best advertisement for science and longevity, Patrick still came into her ANSP office at age 100 to work on her textbook series Rivers of the United States.  She passed away in 2013 at age 105, having been predeceased by two husbands and leaving behind a child, stepchildren, grandchildren, and great-grandchildren.

Surprise!  Since she was born and died as Ruth Patrick, you can be excused for assuming, as I did, that her mother’s worst fears were confirmed and Ruth Patrick was forced to chose science over family.  But when Patrick married an entomologist named Charles Hodge IV in 1931, her father requested that Hodge allow his daughter to keep her name: “I want the name Patrick to amount to something in science.”  Mission accomplished, Mr. Patrick.  And for the rest of us women in STEM trying to make our own marks, remember that you’re in solidarity with one of the best limnologists in history next time your mom asks that question! 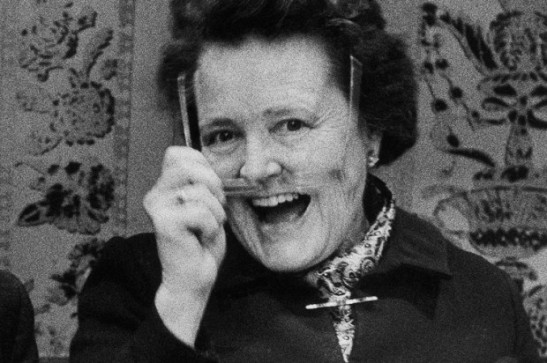 Something tells me this woman would’ve been fun to hang out with. Image from http://www.salon.com/2013/09/24/ruth_patrick_pioneering_ecologist_dead_at_105/

For more profiles of women in science, check out our articles on seaweed scientist Margaret Gatty and physical oceanographer Margaret Robinson!  (We decided it was high time to feature a female scientist who wasn’t named Margaret.)

For more info on Ruth Patrick:

Description of the Patrick Principle