How do we science? / Science

There are a lot of things scientists still don’t know much about (which is a good thing, otherwise I wouldn’t have a job…).  And there are sometimes things that take a long time for us to puzzle out.  Recently, one great scientific mystery may have been explained, mainly, what’s the deal with recalcitrant dissolved organic carbon in the deep ocean?!?

Wait, recalci-what?  Yeah, I didn’t know what this stuff was either until not so long ago (but it’s kind of a cool concept).  Recalcitrant dissolved organic carbon (or RDOC, pronounced R-DOC like ‘what’s up Doc?’) is operationally defined as all that energy source  (i.e., food) leftover after all the animals, microbes, phytoplankton, and what not, have munched on the more yummy bits.  In other words, it’s all that weird, slightly old food left over at the end of a potluck.  It’s ‘food’ technically, but nobody really wants to eat it.  And the deep ocean is filled with this stuff (relatively speaking), making it one of the largest reservoirs of carbon in the world.  It exists in small amounts (but big enough that, theoretically, something, like a microbe could munch on it) and is ubiquitous at these ‘background’ levels all over the world. 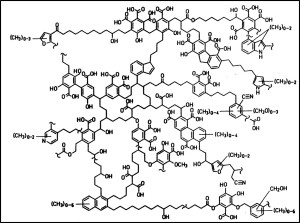 Looks yummy, yes? An example of the complexity (and large size) of DOC. From here.

The long held concept about RDOC, is just that, that it’s recalcitrant and therefore the molecules are too big, too complicated, and too messy to be utilized by microbes in the deep ocean.  But the other thing to know about RDOC is that it is extremely diverse in its molecular composition.  Meaning, you may have hundreds or thousands of different types of molecules all in the same mixture.  In breakfast terms, this could mean you have a big bowl of cereal but each piece of cereal is a different type (say Cheerios, Coco Puffs, Lucky Charms, Cinnamon Crunch….until you have a full bowl).

And this is where this ‘new’ piece of the RDOC puzzle comes into play: the dilution hypothesis.  Back to breakfast, you now have this bowl of cereal where each piece of cereal is different.  But, because of something about you (specifically, your metabolism) you can ONLY eat Lucky Charms, then your kind of out of luck.  Even though you have this whole bowl of cereal, you can only eat the one Lucky Charms piece in the whole bowl.  And that would take a lot of energy (and who wants to pick through soggy cereal?).  From an energy perspective, it would be much easier (and better) just to give up on this mixture of cereal and go find a bagel.

Somewhere in there is a single piece of Lucky Charms you can actually eat. Tough life being a microbe…!  Colorful picture from here.

Which is the idea behind this dilution hypothesis.  Because the RDOC pool is so structurally diverse, it’s nearly impossible for microorganisms to utilize this carbon pool and still get enough energy to survive, so instead, they rely on a different energy source altogether.  Therefore, RDOC isn’t ‘recalcitrant’ at all.  It is seemingly yummy to microorganisms, it’s just in such incredibly small amounts that it’s not metabolically feasible for them to eat the one out of a million Lucky Charms cereal pieces.

Look! They are actually eating the DOC, but only at higher concentrations (Arrieta et al., 2015).

The idea of RDOC in the deep ocean has been around since the 1960’s, but nobody really thought to think about it from a dilution stand point.  It just took one person to think outside the box, and the whole question of ‘how does this stuff persist for so long?!?’ may be answered.  All it takes is a little thought (and some experiments….).

Link to the original article from Science (not open access…): ‘Dilution limits dissolved organic carbon utilization in the deep ocean’