How do we science? / Scientists in Action!

From Kelsey, currently (haha, pun!) on her California Current Cruise-

This week, I’m writing to you from someplace other than my little cubicle in the Marine Sciences Dept.—instead, I’m aboard the good ship R/V Melville, currently sailing through the Pacific Ocean! My advisor, another graduate student from my lab (Natalie of Living with Diatoms, Part II), and I are on a 4ish-week research cruise in the California Current area (a north-south line off the coast of California) to do field experiments and gather samples for analyzing back in the lab.

On the left, squiggly brown arrows indicate the direction of the California Current. On the right, colors show the presence of upwelling (indicated by the cool blue) off the California coast. Courtesy of: mbari.org

Fittingly, the start of our research cruise was christened with water—toilet water, in fact, leaking out from under the lavatory door and up the aisle of our airplane. Our flight from Raleigh to San Diego hadn’t even left the gate and already we were getting wet. It was frustrating and frankly a bit gross, but I’m choosing to take it as a good omen for our success on this research cruise.

To call it a research “cruise” is misleading—although we’re on a boat and the food is buffet-style, the emphasis is about 95% on the “research” component of our voyage. The lazy part of me whimpers quietly at the prospect of 24/7 research/work, but it makes sense—the whole reason we’ve bothered to come out here is to gather data. Also, research cruises are almost obscenely expensive—if memory serves (i.e, don’t quote me on this), they can cost in the tens of thousands of dollars per day—so the scientists onboard don’t want to waste their money sunbathing on the deck.

The R/V Melville in port prior to the start of our cruise.

The first two days of the cruise weren’t spent doing experiments or even moving through the water. In fact, the Melville didn’t leave port until our third day on the boat. We were busy though, first bringing our supplies, instruments, and machines onto the Melville, then unpacking those supplies, and finally going around with duct tape, rope, screws, and a drill to fasten everything down. Especially in the areas where people will be doing science, you aren’t supposed to leave anything free to slide around if the waves get rough.  At first, it seemed like overkill, but after a few days at sea it became obvious what we had forgotten to tie down.

Most of our days since we’ve left port have been spent collecting samples (i.e, bottles of seawater) and filtering that seawater through small circles of paper or plastic. The novice filterer might think that all filter discs are created equal, but in reality these filters come in a variety of materials and pore sizes, meaning that you would use a different filterdepending on if you wanted to look atbig hulking diatoms orteeny-tiny cyanobacteria. A funnel-like device drains the seawater onto your filter, and a vacuum pump sucks that water through the filter itself from below. What you’re left with at the end(usually a bunch of yellow-brown or green gunk) are all the tiny creatures that lived in that volume of seawater you poured through your filter.

In my down time, I’ve been poking around the ship itself. The R/V Melville is no tiny rowboat—it’s not as large as a cruise ship by a looooooooooooooong shot, but it’s large enough for thirtyish scientists and twentyish crew to fit comfortably inside (as long as you’re okay not getting a lot of alone time). The whole back deck of the ship is open to the elements, and serves as a platform from which scientists can dunk their instruments and sampling equipment into the water. There are multiple cranes on the boat, used to transport cargo from shore to boat as well as to drop CTD rosettes over the side (See future posts for an explanation of what these are!). Inside, the décor can only be described as industrial and minimalist, with an emphasis on functionality rather than aesthetics. You can tell by the number of lab benches, -20C refrigerators, and sinks that this is a boat designed primarily with scientists in mind.

I’m going to be honest here: I’ve also been spending a lot of my free time napping. After a run-in with seasickness on my last research cruise (which ended with me sleeping on the ship’s deck atop a pile of wet life jackets) I’ve been taking no chances. I was on the maximum recommended 2Bonine per day for the first few days, which left me completely nausea-free. Instead I wandered around the Melville feeling drowsy and kind oftipsy.Nausea aside, when the boat is rolling a lot it’s a struggle just to stay physically upright. I can feel the irrational, animal part of my brain scrabbling for a purchase on reality, gibbering at the rest of me—This room is moving! Can’t you see it?? Something is not right here! Ahhhhh time to panic!—and this goes on and on until you retreat to your bunk for sleep or the boat’s motion slows. 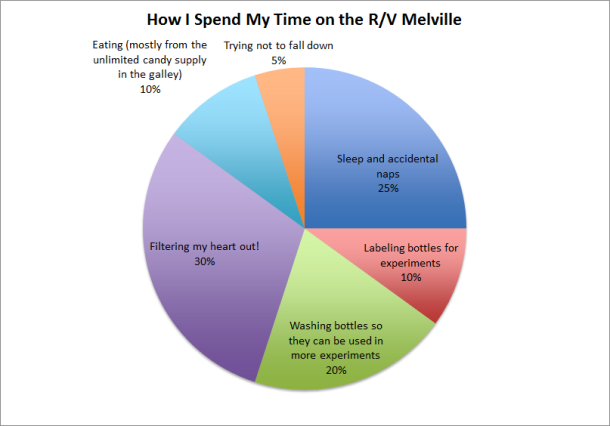 We finished up our first set of experiments this morning—a bunch of on-deck incubations of seawater treated with iron and some other good stuff to see how phytoplankton respond to these nutrients—and might start our next set late tonight (i.e, 2:30am). Also—I saw a whale today! This morning, when we were taking our incubation bottles out. It surfaced, just long enough to breathe, and then dipped back underwater. I love diatoms, but that just made my entire day.  It’s great to imagine all the sea life around and underneath our boat. Slightly frightening, greatly humbling, but definitely amazing. 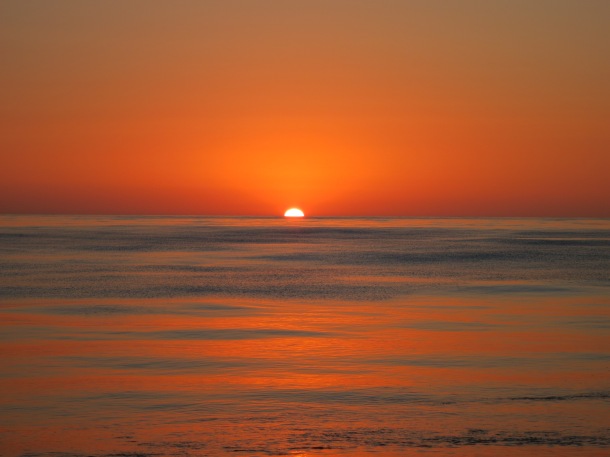 Sunset in the California Current.

Stay tuned next week to see…

Will our intrepid young scientist throw up from seasickness? How many mini Snickers bars can she eat from the galley in one day? And what is up with the massive amount of filtering—what dark diatom secrets are these scientists trying to unlock?

5 thoughts on “A Scientist at Sea: California Current Research Cruise (Part I)”