As promised but a little late, here’s a breakdown of current tidal energy technologies! This post is similar to my previous summary of wave energy techniques, so hopefully you’ll find it just as informative. 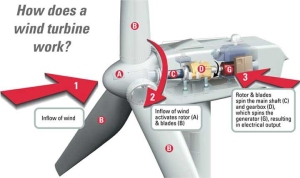 In this handy graphic, you can see all the little components that are inside the hub of a turbine.

The utilization of tidal, or as it is sometimes termed ‘current,’ energy is a bit different from wave energy in its application so far. While wave energy has distinct categorical technologies associated with harnessing energy from certain wave mechanisms (i.e. point absorber and the wave attenuator), tidal power is a bit more malleable because it’s not quite as developed. Nevertheless, there are a few general types of machines that are currently being researched for use in generating energy from ocean currents and tides. Some may look familiar to you because of their similarity to wind turbines, or even your household box fans! As such, they’re a little easier to understand than wave energy converters. You can think about how you might cool yourself off during this hot summer weather with a fan-you plug it in, and the electricity travels through the cord into the motor, where the Alternating Current uses magnetic induction to make the rotor spin. Easy, huh? Many types of energy generators (wind turbines, dams, even burning fossil fuels) utilize this process in reverse. The wind flows over a turbine, water flows through the dam, or heated fuel drives the spin of a turbine inside an engine. The turbine spins, and a current is generated.
Tidal power is that simple. When the tides ebb and flow water moves in one general direction, either toward or away from the shore. If we put a tidal power device in the path of that flow (or anywhere there is a consistent current in the ocean, like the Gulf Stream) we can use that flow to create energy, in a very similar way to how we use wind turbines currently. But let’s look at a few specific ways that we have been trying to get tidal energy:

This first one’s going to look really familiar. It’s called a Horizontal Axis Turbine (HAT), and it’ almost identical in design to wind turbines you’ve probably seen before. Ocean engineers have to make a few changes, however, to make them suitable for ocean environments like using an acceptable material for the blades that won’t corrode in saltwater, or adding a suitable base so it will stay put in a roving bed of sand. This design has the benefit of having already been studied extensively both in the wind energy industry, as well as the airline industry. (Did you know that turbine blades use the same principles as airplane wings? It’s true.) We can use this existing base of knowledge so we don’t have to start from scratch. One valid criticism these tidal turbines draw is their danger to marine life. Just like birds and bats may be in danger from wind turbines, fish and marine mammals could be hurt or even killed by a spinning fan placed in their habitat. Some ways we could protect these animals from such a fate would be by strategic planning of tidal farms, i.e. only installing them in places relatively void of sea life, or even setting up alarm systems which would shut down the turbines if animals ventured too close. 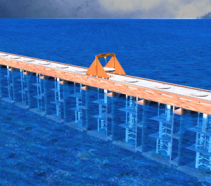 Another type of tidal power device is the Vertical Axis Turbine (VAT). These are essentially the same as HATs, but they spin like a barber pole rather than a ferris wheel. VATs and HATs can be placed in a line with some light structure surrounding them to create what is known as a ‘tidal fence.’ This construction might be enough to keep larger sea critters from getting too close to the spinning blades. These ideas can also be combined with the device called a ‘ducted’ HAT. A ducted HAT somewhat resembles the turbines used in gasoline powered engines: the turbine, rather than having two to four blades splayed out from its center, is usually made of up 5-10 smaller blades encased in a shallow pipe. These ducts might also be a solution to protection of wildlife. 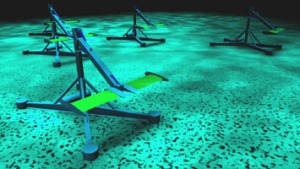 The last type of tidal power generation in this post is called an oscillating hydrofoil, a design used almost exclusively under the moniker StingRay, and developed by The Engineering Business. This design is very reminiscent of (especially old-style) airplane wings, and it works very similarly. As the current flows over and under the airfoil, differing pressure gradients will cause it to bounce up and down. This vertical motion will generate electricity. This is just one of many innovative designs developed recently for use in tidal power, but it is also very different from the conventional methods described above.

These are just a few ways in which we have developed tidal energy generation. None of these methods are well established or even in commercial use right now, but they are a testament to the innovation and creative design process that will be essential in the switch to renewable energy.