Energy / Energy, News, and Climate / How do we science? / Scientists in Action!

Does your blog seem a little sluggish?  Wishing you could ditch the coal-burning furnace keeping the internet connection blinking?  Worried that your blog’s carbon footprint is embarrassingly large considering it doesn’t even have feet?  My fellow blogger, you need some renewable energy, which means it’s probably time to call on Megan Schutt.

Megan to the rescue! Image from http://marine.unc.edu/spring-newsletter-spotlight-megan-schutt-joel-fodrie/

Megan has been a pivotal energy source for UNdertheC since we launched in 2013.  There we were, a group of would-be bloggers with big plans for marine science outreach and zero experience in WordPress.  That didn’t daunt Megan, who spent hours learning the platform so that our new domain name didn’t look like it’d been created with LiveJournal circa 2001.  She added menus, divined the meaning of the “sticky” post, and configured author archiving so you can click on Megan Schutt and read all her articles.  By the end of her hackathon, UNdertheC had the sleek, intuitive format you see today.

It makes sense that Megan was so keen to take on a technological challenge.  She arrived at UNC after completing her B.S. in Aerospace Engineering from the University of Tennessee- Knoxville.  So what prompted an engineer to pursue a graduate degree in Marine Science?  Spoiler alert: it wasn’t because of dolphins.  Megan had a longstanding interest in offshore winds, a field that requires knowledge of marine science and a foundation in engineering.  She joined Dr. Harvey Seim‘s lab to develop a more accurate map of wind energy resources along the North Carolina coast.  Before wind turbines are constructed, scientists need to identify areas where they’ll get the most bang for their buck.  Consequently, there’s a lot of interest in developing accurate maps of coastal regions with conditions best suited for wind energy. 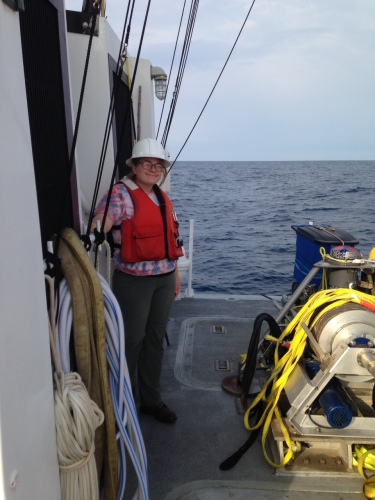 Megan at sea, modeling the finest in construction site chic. She was participating in a cruise to retrieve and redeploy an oceanographic sampling instrument. Photo by Sara Haines.

Using Matlab and more equations than most of us see in a lifetime, Megan used wind speed data collected by offshore buoys to determine the impact of boundary layers on wind energy predictions.  To understand what that means, imagine wind speed as a vertical profile from the ground to the atmosphere.  When wind passes over different types of surfaces, like when it moves from the land to the ocean, the lower parts of that profile may slow down relative to the upper parts.  This creates what’s known as a boundary layer.  Wind turbines are powered by the wind, of course, so it’s important to be able to predict the thickness of those boundary layers when scoping out the best locations for new turbines.  Otherwise, scientists may expect that a turbine will experience a different wind speed than it does in reality, due to the influence of boundary layers.  Such a miscalculation could reduce overall efficiency.  Megan computed these boundary layer predictions for the NC coast, and you can read more about her research in her own words here or here.

Not to be confused with her alter ego “Megan Shutt”, the real Megan has also discussed her research and learned more about wind energy at a bunch of conferences and workshops, from Chapel Hill to Norway! Photo by Megan Schutt.

In a department full of plankton and coral enthusiasts, it was a common joke that no one could understand Megan’s research.  But that really wasn’t true, because Megan is one of the most skilled and enthusiastic science communicators out there.  Her range of interests and witty humor are well-documented on UNdertheC and her Twitter account.  (Just try to read the opening paragraph of this article without laughing.  I dare you.)  Megan’s posts transcend mere geographic boundaries, evidenced by the day her Potato Earth post was viewed by 500+ people in Turkey.  Even if she felt like an engineer out of water during her Chemical Oceanography class, Megan tried her best to educate us all on the finer points of renewable energy, as demonstrated by her many articles on the science and politics of energy.  Megan could always be counted on to demystify baffling topics while entertaining the reader in the process.

Megan killing it at her M.S. defense. (Defenses are streamed to our marine field station, which is why she’s in front of a TV full of people.) Photo by Kelsey Ellis.

This May, Megan successfully and awesomely defended her M.S. and graduated from UNC.  She’ll soon be an UNdertheC alum, and we will sorely miss her humor, innovation, and willingness to explain her research 174 times.  Although she’ll no longer be powering our blog, it’s clear that Megan has boundless energy for energy.  There’s no doubt that wherever she ends up next, she’ll be pushing boundary layers and recharting the map of renewable energy in the 21st century.  Good luck Megan, though you certainly won’t need it!