This guest post was written by UNC-CH sophomore, Lily Olmo (@lilyMolmo). Lily participated in the UNC Institute of the Environment Field Site, study abroad program at the UNC-CH Institute of Marine Sciences in Morehead City, NC, this past Fall 2017.

As soon as I could walk, I was meandering through nature preserves and aquariums. I spent hours watching turtles pop their heads out of saltwater ponds or following ghost crabs as they skittered across the beach at dusk. As soon as I could type, my google search history included phrases like “how to become a marine scientist” and “sea turtle doctors.” I distinctly remember sitting on my computer in middle school, watching a 2-hour documentary of a sea turtle necropsy, which is basically just a fancy term for an autopsy done on an animal. Ten years later, and my childhood fascinations are turning into reality, although I must disclose I am not yet a sea turtle doctor. Last month, I completed a wonderful semester as a field site student at the UNC Institute of Marine Sciences. Engaged in coursework, field trips, and research, I began to feel like I was finally where I belonged. Little did I know that my semester in Morehead City would bring a newfound love for a classification of organisms called infauna, which hold great importance in marine ecosystems.

During one of our first few weeks in Morehead City, we filled up the IMS vans and headed down the road to Pine Knoll Shores. As part of an annual field site research project, we collected data on the abundance of sandy beach organisms, such as mole crabs and coquina clams. These organisms are classified as infauna, meaning that they live within the sand. As the tide comes in, these organisms scurry up to the surface to obtain food from the water washing over them. As the tide recedes, they quickly burrow back into the sand to hide from their predators. One moment they’re there, and the next they’re gone. The famed Dr. Fegley continued to explain to us about different classifications of infauna, and that there were thousands of microscopic infauna beneath our very feet. I was instantly intrigued. I had spent every summer for the past 19 years of my life on the beach, and I had never taken the time to realize that I was surrounded by much more life than I would have ever known.

For our semester-long capstone project, our class conducted research to understand how the environment is affected by the implementation of different types of living shorelines. Living shorelines are alternative methods to stabilize our coastlines that introduce natural methods of protection through marsh grass and oysters instead of concrete bulkheads. When I heard that studying infauna was an option, I eagerly joined my friend Abigail in measuring how infaunal communities differed among the various types of living shorelines. We decided to study two different classifications of infauna. One of these classifications is meiofauna, which are organisms between 63 and 500 microns in size, basically the size of a needle pinhead. This includes organisms like copepods and nematodes. They remind me of creepy little bugs that would show up in my nightmares. 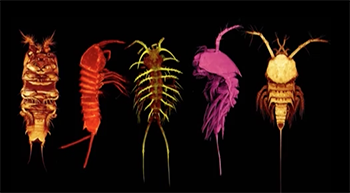 Macrofauna, which are greater than 500 microns in size, are typically represented by organisms like gastropods and polychaetes. The picture below gives you an idea of the size range we’re talking about.

Various marine macrofauna species compared to the size of a penny. PC.

Over the course of the semester, I learned how to identify and speciate these little guys from samples that we took out of various marsh habitats. But it wasn’t until we began analyzing data that I began to question the importance of these tiny organisms in the scope of our broader environment.

So here are 5 of the many reasons you should care about infaunal organisms in coastal ecosystems:

A lovely GIF of a tardigrade perusing through the water column. PC.

Much like I find when I open my gifts each Christmas morning, great things DO come in small packages. Often overlooked, marine infauna hold great potential for future research and complex environmental assessments. And this is what I love about marine science. The longer I study, the more I realize how many things I have yet to know about our oceans, and just how much we still have left to discover as a global scientific community. But isn’t that what makes our jobs so fun?