This article is a guest post by ODU undergradaute Ben Maxie. Ben works in the Barshis Lab and studies the evolution of stress tolerance in corals and other organisms.

Despite an adverse but nonbinding vote by the International Whaling Commission (IWC), Japan has sent a whaling fleet south to Antarctica. The fleet left on December 1, 2015, and will be gone for around three months. The International Court of Justice shut down Japan’s research whaling program in 2014 over concerns that lethal whaling is neither scientific nor necessary. Western powers that be, most vocally Australia and New Zealand, accuse Japan of using research as a pretense for commercial whaling. Japan still officially opposes the ban and says that they only lethally research species that aren’t endangered.

Whales, among many other species, used to be hunted with such ferocity that several species were driven nearly extinct. For instance when Fin whales started dwindling  in the 1960’s, whalers shifted to Sei whales, catching them in mass until their population dropped off.2

In 1985, a moratorium, a break, was declared so that whales could not be hunted for industry until whale populations recovered from Industrial Revolution times. However, the law has a clause that allows for killing whales if necessary for scientific studies. Several countries have taken part in such research whaling, notoriously including Russia and Norway.3 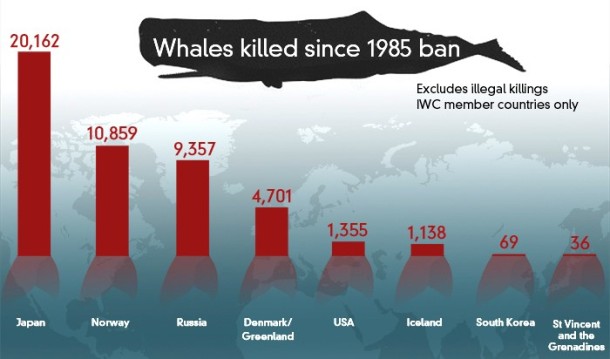 They’ve got nothing on Japan. Japan hunts whales like Genghis Khan, with grenade-tipped harpoons6 and at times electrocution.7 Japan has killed around as many whales as Russia and Norway combined, totaling over 20,000 whales caught for research since the moratorium was established.

The International Court of Justice ruled in 2014 that Japan’s whaling projects were not scientific, citing a near complete lack of peer-reviewed research related to whales (Japan published two papers on whaling since 2005, mostly done with preliminary data). In 2006, 21 leading scientists wrote an open letter to the Japanese Government, pointing out that the whaling is “not designed to answer scientific questions relevant to the management of whales, kills hundreds of whales each year in the absence of a compelling scientific need,” and creates a “profit incentive to kill whales even when no scientific need exists.”

Several countries and conservation groups have raised accusations that Japan is using research as a veil to hide commercial whaling. The stated aim of most of this research is to monitor whale populations to determine when populations have recovered enough to resume commercial whaling. All of the whaling research is handled by the Institute of Cetacean Research (ICR), a nonprofit funded by Japanese Government subsidies, and a for-profit company called Kyodo Senpaku. While the researchers use the organs (the ones that weren’t blow up from the grenade harpoons) and biopsies for their studies, the meat is sold as a delicacy in markets by Kyodo Senpaku.

There doesn’t appear to be much profit in whaling, however. A 2012 Nippon Research Center poll conducted on the Japanese public showed that just 11.2% of the population had bought whale meat in the last 12 months, and only around 27% responded that they are supportive of whaling. Only 2.6% of respondents from ages 15-19 said that they support whaling.

Kyodo Senpaku and the ICR had a warehouse sale of surplus whale meat in 2011-12. Only around 25% of the meat sold, even after several markdowns. A 2012 IFAW report concluded, “Whaling is dying in the hearts, minds, stomachs, wallets, and marketplaces of Japan.”

Japan seems to like the idea of whaling more than actually eating whale meat. This looks to be a weak excuse to lie about propping up a failing industry. Yearly government spending on the ICR averages around $9.78 million, and usually does not break even from meat sales. In a pattern alarmingly resembling what is happening with rhino populations,9 Japan’s whaling fantasy is unnecessarily driving whales, notably the Minke Whale,10 closer to endangerment.