Guest Posts / How do we science? / Scientists in Action!

Sometimes, science doesn’t always go as planned. Larisa Bennett explains how to make the best of a not-so-great situation in her latest guest post. If you haven’t visited us in a while, Larisa is a UNC undergraduate student spending a semester at the UNC Institute of Marine Sciences. See her first three posts, here, here, and here.

With an ominous crunch the outboard motor abruptly stopped running. We looked around in dismay realizing we were aground in shallow water atop a sandbar. The stranded boat held my fellow field site students and an assortment of trash we had collected as part of our capstone project. After a long day in the field that had already been rife with challenges, we had been trying to get back to the boat ramp without further incident. This was just the icing on the cake of bad luck to become marooned just meters from the entrance to Taylor’s Creek and its promise of home, hot showers, and dinner.

One subgroup including Patrick Winner (pictured) is focused on the spatial distribution of debris between the tidal zones – how much debris and what type is found in each zone. PC: Abbey Vinson

Every year the Institute of Marine Sciences (IMS) field site conducts a Capstone project involving all the students working together. The students are given the principal Capstone topic – Marine Debris this year – and then divided into sub groups to come up with a specific question to examine through scientific experimentation during the course of the semester. At the end of the semester we act in the role of a consulting group with expertise on our topic and present our findings in a meeting open to the general public. About 80 or more people are expected this year. Our focus surrounding the overarching Marine Debris topic is a comparison of two different tidal zones – supratidal (area just above the high tide line) and intertidal (area covered by water at high tide and exposed at low tide) –focusing on what kinds of human originated debris are found in each and how that trash accumulation affects the ecology of the zone. We have been working out in the field collecting marine debris samples from the supratidal and intertidal at various sites around the area. To sample in as unbiased a manner as possible we chose similar sites with comparable characteristics to collect data from – sandy beaches with clear zonation that are at least 100 meters long so as to allow for plenty of space to find debris in. On this particular day we headed out to survey Treasure Island – a mysterious tiny island in the Rachel Carson Reserve near Horse Island.

Another of the subgroups that includes Ryan Leighton (pictured) is focused on bacterial analysis of the debris to see what kinds of bacteria are living on the trash and whether it is harmful to humans. PC: Abbey Vinson

The first issue was that none of the people on the boat had actually ever been to Treasure Island. We were attempting to locate it with coordinates pulled off of Google Maps. This tactic landed us in the middle of the waterway next to a marshy outcropping. Undeterred we jumped down off the boat and staunchly waded around the marsh edge, avoiding stepping on rays as we went, in an attempt to find a beach. We eventually found a small sandy area on the far side of the marsh, but once upon it realized that it was not 100 meters wide (which is the amount of area we had designated as sample sites). With this in mind, plus the dubious location, we realized that we were not on Treasure Island, which supposedly had a beach that would suit our project specifications. We had inadvertently googled coordinates to a random sand bar.

When we first reached what we mistakenly thought was Treasure Island, the boat could not navigate in close for fear of getting stuck on sand in shallow water. Everyone picked up some gear, jumped down into chilly water and trekked over to the random sandbar (that was NOT Treasure Island), avoiding the numerous stingrays swimming about as we waded in. PC: Abbey Vinson

After consulting the maps on our smart phones (this random sand bar curiously had 4G data connection and full service, go figure) we came to the conclusion that Treasure Island was a marshy spit of land we could spy to the north of our present coordinates. The larger spit of land next to that indistinct shoal had horses grazing on it and was likely to be Horse Island. Reassured, we aimed in the new direction. Captain Joe piloted the boat around sand flats to pick us up and ferry over to our new location. Once on Treasure Island we waded through an expanse of marsh carting heavy boxes of gear to get to our target beach. It turned out the site was only about half sandy beach while the other half was a combination of marsh flat and oyster reefs. Slogging through a marshy quagmire looking for trash is decidedly less pleasant than walking on a beach. Mud oozes around feet and ankles sucking you in while swarms of tiny crabs sidle around as you try not to step on their scurrying little bodies. The crab swath parted like a miniature Red Sea around our feet as they frantically tried to avoid being crushed. There were so many crabs on Treasure Island that their clicking claws created a racket much like crickets make on a midsummer night in North Carolina. The oysters that make up the reefs have razor sharp shells that can easily slice through human skin. Those were avoided in favor of only surveying the waters peripheral to them. We had taken so long finding the elusive site that we did not complete our debris collection until late afternoon. We finally loaded everything back into the boat, rinsed the mud off our legs as best we could, and set off back to Taylor’s Creek. 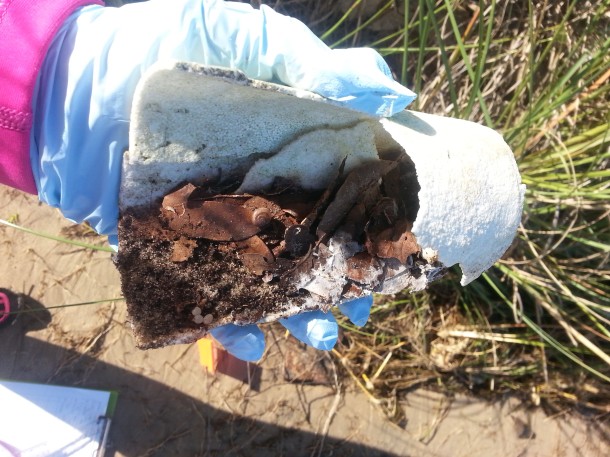 One Capstone project subgroup is focusing on how debris can be utilized by organisms in ways that can actually be beneficial. This snail laying its eggs inside a piece of foam debris is an example of such a utilization. PC: Larisa Bennett

The series of unfortunate events continued at the unwelcome silence de la mer surrounding us and our trash trove trapped on the sand bar. We maneuvered ourselves around in the rocking boat to distribute weight off of the snared engine propellers. Then we tried using a pole to push off against the sand. Finally, after the intrepid Captain Joe got out and pushed, we managed to extricate ourselves from our sticky situation. Home, hot showers, dinner…ahhhhhhhh!

Everyone is all smiles after we finally got unstuck from the sandy shoal and turned into Taylor’s Creek where we could dock the boat! PC: Larisa Bennett

This was not the first day we had unfortunate events interfere with capstone field work. Originally our field work was going to include a diving component to look at the subtidal zone (area below the tidal zone) as well, but the first site – Carrot Island – had terrible visibility for diving on the day we went. The water was a cold, black abyss that not even dive lights could penetrate. Our second site – Shackleford Banks – was visited right after a storm had passed through, so there were tannins in the water turning it a dark red-brown color that also resulted in poor diving visibility. After the lack of success from our first two attempts, the diving/subtidal component was scratched from the project. The natural world’s unpredictable elements and even predictable obstacles that come with field work have significantly impacted how we have conducted our project. Field work is never easy and is often a downright struggle. The challenges that we field site students have gone through not only with our capstone project, but also our individual independent research projects are a testament to the resilience, endurance, and optimism scientists must project in order to make positive contributions to the body of knowledge we humans constantly strive to increase.

The first outing to collect debris was to the Taylor’s Creek side of Carrot Island. It was a windy, grey day. Diving to collect subtidal data was impossible in the dark, virtually opaque sea water. We still managed to pick up plenty of supratidal and intertidal trash. PC: Abbey Vinson

One thought on “Marooned at “C””