Guest Posts / How do we science? / Marine Life / Science / Science and Communication / Scientists in Action! / Travel

In 2012 I spent a month on Orpheus Island on the Great Barrier Reef (GBR) in Australia. It was here that my Ph.D. advisor Mikhail V. Matz, Line Bay from the Australian Institute of Marine Sciences (AIMS), and myself embarked on a research project that would end up being published in the journal Science. Upon arrival, we were greeted by several colonies of Acropora millepora corals that had been collected by Line from a location much farther north along the GBR, Princess Charlotte Bay (PCB). We then collected additional colonies from Orpheus Island (OI). Since PCB corals experience much warmer water than corals from Orpheus Island we predicted that PCB corals could deal with higher temperatures and might be able to pass genes involved in thermal tolerance to their babies.

In order for our experiments to work we needed good planning along with a string of good luck.  Once the corals are collected, the next step is to wait. What are we waiting for? We are waiting for the corals to have sex! The corals we work on are called broadcast spawning corals and they have very interesting (or depressing) sex lives that involve a single night of reproduction yearly, called the annual coral spawn. We isolate the corals right before spawning and then scientists scurry around with red headlamps on, delivering eggs and sperm bundles to their colleagues and all of this is done after midnight! 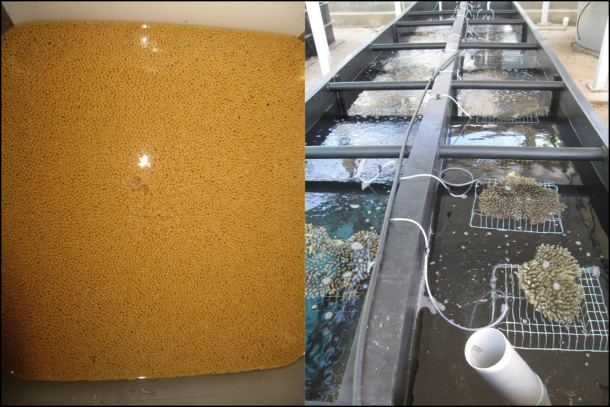 LEFT: Egg and sperm bundles collected from a single coral that will be used to make babies from known coral parents. In this way we can know concretely who is the mom and who is the dad. RIGHT: Corals from Orpheus Island and Princess Charlotte Bay happily waiting for their big reproduction night in the raceways (Photo credit: Sarah W. Davies) 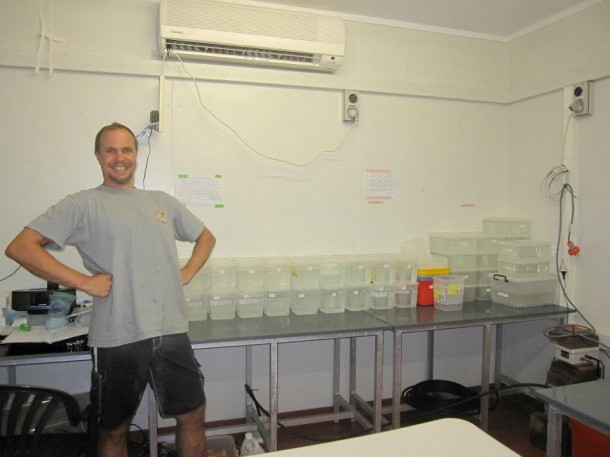 A very proud Professor Matz aka “Misha” with his coral babies. These babies are maintained in at normal reef temperatures (28C) during development.

These coral babies, also called larvae, are maintained at 28C for several days. After the larvae are ~5 days old we begin our experiments where we slowly heat up the larvae until they start dying, but not too quickly.  Once the larvae reach 36C we monitor the mortality rates of the larvae with different parents. We observed that babies whose dads, and especially whose moms, came from the warmer location (PCB) were better able (i.e. died more slowly) to tolerate high temperatures when compared to the coral babies whose parents were from the cooler location (OI). In fact, if both your mom and dad came from a warmer location you were 10 times more likely to survive under heat. When we got back to Texas we did many more experiments trying to understand why larvae that came from parents from warmer locations were more heat tolerant. We used transcriptomics and genomics to better understand what types of genes contribute to this tolerance. If you would like to know more about what we found I encourage you to read the manuscript or watch my webinar that I gave to the Southeast Climate Science Center last month.

To read more about this research, check out the paper from the journal Science.

3 thoughts on “Do corals have the genetic ammunition for climate change?”