This week, we have a special guest post from Joey Murphy, a former UNC undergraduate and current Research Assistant at the UNC Institute for Global Health and Infectious Diseases, on why science issues never seem to come up during U.S elections. Why you gotta be like that, politics? See his post to learn why we should be showing science some love in the upcoming electoral cycle:

On March 23rd, Ted Cruz announced his candidacy for the president of the United States in 2016, making himself the first major player to do so. While some may mark this as the beginning of the election season, anybody who has been watching the news knows otherwise. Hillary Clinton eating burgers in Iowa and Scott Walker speaking at the “freedom summit” in Iowa are no accidents; this election season has been going on for months now. Most people might be groaning about another 2 years of a slugfest deciding who our next commander-in-chief, but I could not be happier. I love election season.

When you look at the campaign issues that Americans consider most important in their lives, Science-related issues barely registers anywhere. In 2012, Gallup looked at the issues that Americans were most concerned about and found that the most pressing topics all related to the economy (see below). As you read this you are probably wondering “Joey, you picked such a broad topic like science to write about, how can you say it has no effect on the issues?” And you are exactly right, I did pick a broad topic. The specific “scientific issues” I want to address are ones related to government funds for scientific research and issues surrounding climate change, which always remains controversial. Obama avoided campaigning on climate change during the 2012 elections because the perception was he had nothing to gain from addressing a controversial issue. It wasn’t until he had wrapped up the election acceptance speech did you mention climate change. 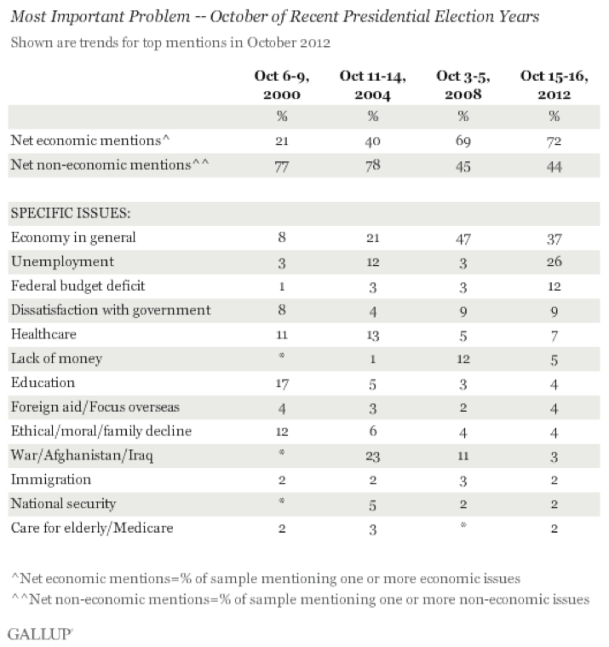 Looking forward to 2016, will we see global warming become an issue in the election? My gut reaction says probably not. We might see it in the democratic primary when candidates pander to the more liberal branch of the party only to forget they had any sort of position about it once the general election comes around. Why is something that most climate scientists say will be the defining issue of the next generation getting so little air time during election seasons? Put quite simply, the perceived notion in political rhetoric is that climate change prevents economic growth. And after the 2010 Supreme Court case Citizens United vs The Federal Election Commission ruled that limiting campaign donations is a suppression of free speech tying corporate interest more closely to the political agenda. Whether you agree with this or not, the result is individuals like the Koch brothers are pouring millions of undisclosed dollars into Super PACs. This leaves any climate change debate out of the picture, despite the fact that addressing this issue now will help the sustainability of businesses for the future. 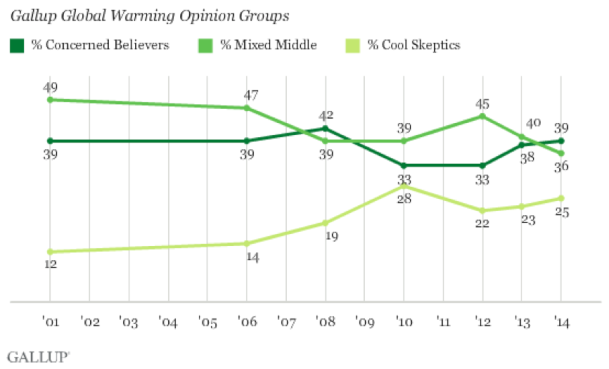 In taking a second look at the polling data Gallup provides above, I think there is no coincidence in the fact that the percentage of people concerned about global warming dipped dramatically in 2010 when both the rise of Super PACs and the Tea Party happened in that same year.

The rise of the Tea party has meant many things for political direction of the United States and how science will play in the upcoming election. The 2010 congressional elections saw establishment republicans defeated in primary elections to more conservative candidates. This new crop of republican legislators are less likely to compromise, holding firm to their ideology. This was evident in 2011 when disagreements between Obama and tea party republicans were hours away from a government shutdown and barely passed a budget plan in the 11th hour. This new batch of Republicans are rewarded for standing up to government spending because the alternative is a more conservative candidate will defeat them in the next primary.

I have strayed from my point on how science will play out in the coming election and I bring up the rise of the Tea party because budget cuts are more and more frequent within the federal government and often times this affects how research money is allocated. I work in infectious diseases by trade so my knowledge of this pertains more to the National Institute of Health funding than wherever marine scientists get their funding from (NOAA? James Cameron’s private marine science ventures?). Here is a look at NIH funding over the last 60 years. 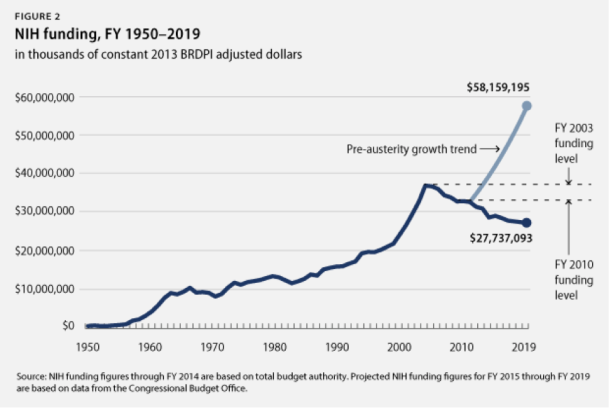 The NIH budget peaked in 2003 and has been dwindling ever since. When you compare this to the budget of the US department of defense, the exact opposite is happening. There is money in the federal government and federal spending continues to increase, but it is not going to science research like it used to be. 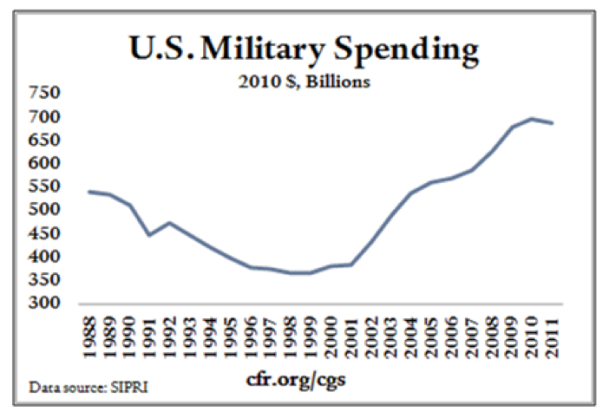 Everything I have presented at this point probably makes you despair, especially since many of our livelihoods in research are dependent upon the funds available to make our research happen and without the funding, we are, well, unemployed. But I think there are a lot of reasons to be excited about the future of science and science research despite what politics is telling us. Private research contributions are more readily available than they used to be. Take a look at the Bill and Melinda Gates foundation and the amount of money they have given towards global health initiatives. In 2012, they donated over 2 billion dollars to global health and global development that will employ scientists to carry out their programs. A look at space research shows private enterprises are competing with NASA and anybody who has heard of Elon Musk knows that we are in good hands for the future of research in this area.

While I have fewer things to point to that can give you hope about the state of the 2016 elections, there are some initiatives that if passed will stabilize the state of science in politics. First of which is campaign finance reform. When elections aren’t decided by Super PACs and the donors behind them, we will have a legislature that is more representative of Americans. Limitations on gerrymandering would have a similar effect to make elections more competitive than they are now. 9 out of 10 house seats in the most recent midterm elections were won by incumbents despite the fact that congressional approval ratings hover around the low-teens.

When you look at who to vote for this coming election and become worried about how these candidates will affect your research grant funding or if they care about climate change, chances are, they won’t let you know. But look for candidates that are willing to make changes to how we elect our officials so that who we are represented reflects our views. Nobody benefits from an ideological standoff but we benefit from politicians who are willing to compromise.