How do we science? / Science / Scientists in Action!

Welcome to a new series of articles all about the people behind the science. Every month, we will profile students, technicians, and professors in order to personalize the at times inaccessible world of research. 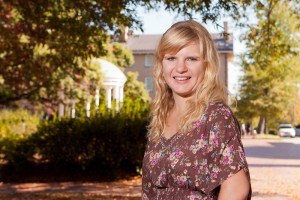 You might say Barbara Zemskova is our resident mixologist – of the ocean that is. Barbara is one of our fellow graduate students here in UNC’s Marine Sciences Department; she’s currently working on her Ph.D with Brian White.  We talk a lot here at UndertheC about life in the ocean: coral reefs, lionfish, and even diatoms. But Barbara studies something that makes all of that life possible, and probably doesn’t get all the airtime it deserves – ocean circulation.

She started off here at UNC as an undergrad with the intent to study Environmental Law. However, that changed pretty quickly when, almost by accident, she wound up getting an Applied Math degree.

Once she found the math in fluid mechanics and her early research in groundwater flow in porous media, her scientific interests became clear.

Barbara’s current research focuses on trying to determine the main factors in circulation and large scale mixing in the world’s oceans. For her work, this involves teasing out the degree of influence of two different causes: kinetic energy input from winds at the surface, and the buoyancy flux exchange that drives sinking.

“We’re trying to get a ballpark estimate of the mixing that drives ocean circulation – whether it’s just wind or if it’s the tilting of the isopycnals that generate sinking.”

To do this, she uses the General Circulation Model developed by MIT, which provides a time series of various oceanic properties at a fairly high temporal resolution (every 3 days for over 16 years). This data, and a lot of math, can offer some insight into the oceanic energy cycle, and where we expect the most influence from buoyancy fluxes and surface winds. You can check out some of her results in the picture to the right – a seasonal breakdown of the available potential energy all over the world. A higher value (red) here represents generation of heavy, sinking water, and lower (blue) is the generation of lighter, floating water.

The disciplines represented in our marine sciences department, unlike many scientifically-based departments, are very diverse. From Serena’s work on the Caribbean Lionfish invasion to Barbara’s large-scale Energy Cycle estimate, it might be hard to visualize what we all have to do with each other. But we’re all studying the environment that makes up about 75% of our world – oceans. Stay tuned for more profiles on our scientists throughout the year, so maybe you can see how we all “mix” together.