Oddities in the Ocean / Science / Technology

When you were little, did you ever do that thing where you cut a worm in half because someone told you two new worms would grow from the parts? I did that thing. And it was the first of many somewhat morbid scientific disappointments in my childhood. It’s half true – the head half might live and grow a new tail. But worms don’t actually have the capability to regrow a head from nothing, as logical as that might sound, and no matter how many preschool teachers, friends’ parents, or babysitters tell you it’s true. So don’t bother. Unless you’re into that whole dissection thing.

A few animals do have a significant regenerative ability, most notably salamanders, certain species of mice, and sea stars. Sea stars can regrow entire new limbs, and it is thought that the sea star can regenerate its entire radial disc from as little as a single arm. The secret to the sea star’s superhero ability is actually not super at all. In some species, this is their form of asexual reproduction. The sea star breaks itself into pieces, and after they all regenerate, there are now five sea stars. Like many forms of reproduction, the building block is stem cells.

Stem cells are cells that have not differentiated completely into a specific type of cell. There are varying degrees of stem cells. You could have an embryonic stem cell that could differentiate into anything. You could also have a blood stem cell, that hasn’t yet differentiated into red blood cells, white blood cells, or platelets. It is this ‘blank slate’ cell that is the key to regenerative abilities in animals. Animals’ bodies keep some stem cells around in case a repair is needed. This is essentially what a star fish is doing when it repairs its limb, only it’s way better at it than we are. 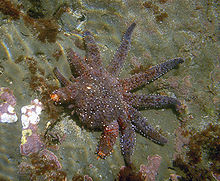 Sunflower seastar regenerating a few of its legs at once. en.wikipedia.org

Now, I know the thought most of you are having is something along the lines of, “Gee, I really could care less how salamanders regrow their tails, but it would be really sick if I could cut off my arm and then grow it back.”…Just me? Okay. The truth is, we’re not even close to figuring out how to give humans this ability. Though, we do actually already have our own types of regenerative abilities. Scars are technically a regenerated material. But our scar tissue cells, while much stronger than the original cells, tend to lose most of their functional capabilities.  The liver, among other organs, is also really notorious for being able to grow itself back. But in all honesty, when was the last time you were like, damn, I could sure use a bit more liver? Researchers say one of the realities is that even if we knew how to do it, to regrow something on the scale of an arm could take years, or even  decades. A more promising area this mechanism is being investigated for is laboratory tissue generation. This just means growing cells in a lab for use in humans, creating skin or bone grafts, or even whole organs. It could mean the end of organ waiting lists as we know them, instead becoming as simple as placing an order for a custom made child. Whoops did I say child? I meant dress. Dress. Scientists say this is still a very long-term goal so keep treating your existing organs – and limbs – with the respect they deserve.

One thought on “Starfish can grow their arms back. Can we?”