Energy, News, and Climate / Oddities in the Ocean / Science

A few years ago, if I saw a cat with glowing green fur wandering around my yard, I’d assume that the poor animal had experienced radiation exposure that had left it eerily lit from within. After checking it for other superpowers and taking a few pictures (first things first, you know), I’d probably head online and google “glowing cats.” Maybe also “glowing cat superheroes, just to make sure I’m covering all the possibilities. 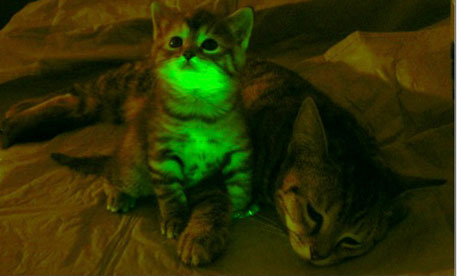 The whole glowing thing seems unnatural, and in a sense it is. Not only are glowing cats a real thing, but they’re also the product of genetic manipulation. Researchers have taken a jellyfish gene that creates a green fluorescent protein (gfp) and inserted it into cat DNA in the womb, creating kittens that glow under certain kinds of light. Maybe a less crazy idea than my “radioactive cat superhero” hypothesis, but not by all that much.  These glowing animals are being used in research to help scientists determine if other inserted genes, such as one that could potentially help to stop the spread of AIDS (at least in cats), are at work.

While scientists have discovered a number of fluorescent proteins that occur naturally in marine environments, most of these organisms are cnidarians (i.e, jellyfish) and corals.  However, a recent study (and it’s open access, wooo!) found that a wide variety of fish, sharks, and rays also biofluoresce in beautiful shades of red and green. As in the case of the gfp kittens, you won’t usually be able to see these fish glow with your naked eye. What these fish are doing is absorbing the blue wavelengths of light prevalent in the upper ocean and reemitting this light at a lower wavelength (hence the red and green fluorescence).  We humans have to look at these fish under UV light to see them glow, but the results are still fantastic. Researchers postulate that the fish themselves might, through yellow filters in their eyes, be able to see each other in all their glowing glory. These biofluorescent markers on the fish themselves might be used to identify each other on the moonlit nights when some fish species spawn, or to assist in camouflaging fish that hide on coral with a similar shade of biofluorescence. I’m excited because these findings help (literally) shed new light on aspects of fish ecology as well as provide researchers with new fluorescent genes to use in future studies. This is research that can benefit all life, both human and otherwise. Maybe my first “cat superhero” idea wasn’t so far off after all. 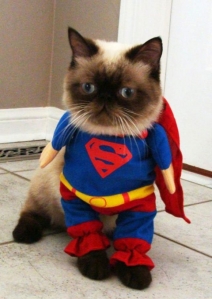