For Fun / Marine Life / Oddities in the Ocean

The ocean is home to some strange and mysterious critters – including some that could give the Justice League a run for their money. From immortal invertebrates to flying fish, here are four super powered ocean animals.

The one that can walk on land

While there are a number of amphibious fish out there, few are more well-adapted to life on land than the mudskipper. Found in the Indo-Pacific, mudskippers are found in swamps, estuaries and mudflats and spend most of their time out of water. The breath by trapping water in their gill chambers and replacing it when it oxygen levels become low. They can also breathe through their skin, allowing some species to survive for up to two and a half days out of water. To move through a water-less environment, mudskippers have evolved a complex shoulder joint that allows them to walk, jump and climb on land, giving an entirely new meaning to the phrase “like a fish out of water”.

The one that can fly

It may come as no surprise that the fish that can fly are called…flying fish. There are over 40 known species of flying fish, who manage their acrobatic feats by jumping out of the water at about 37 miles per hour. Their streamlined, torpedo-shaped bodies allow them to soar above the ocean surface for over 650 ft, allowing them to escape predators like tuna, swordfish, and mackerel.  They can fly high, too—sailors often report finding them on the decks of their ships. 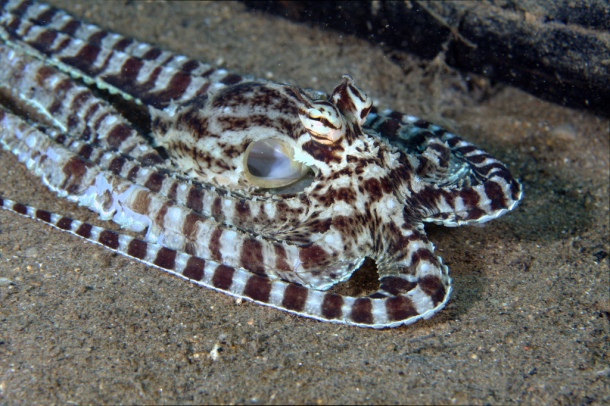 The one that is the master of disguise

First discovered in Indonesia in 1998, the mimic octopus (Thaumoctopus mimicus) lives in the shallow waters in the Indo-Pacific. They are relatively small, only about two feet in length, and are pale brown in color with a number of brown and white stripes. Like many other cephalopods, the mimic octopus has color-changing cells, or chromatophores, covering its skin, which allows them to blend into their environment by expanding or contracting the cells. In addition to just changing its color and texture, the animal will change the way it moves its arms to impersonate a variety of other marine species. It can “mimic” 15 different species, including lionfish, flatfish, and sea snakes, allowing them to scare away predators or trick prey. It’s a mastery of trickery few other ocean animals can beat.

The one that can never die

The name says it all: the immortal jellyfish is known for its ability to cheat death. First discovered in the 1880s, Turritopsis dohrnii only grows to about 4.5 mm in size (or, smaller than a pinky nail). At first glance, this jelly follows the same developmental pattern as all jellyfish, transitioning from egg to larva to polyp to swimming jellyfish. Unlike other jellies, however, if the adult jellyfish can cope with stress by turning back into a polyp. Then, the polyp can continue the process and produce more free-swimming jellyfish. They use a special process called transdifferentiation, where a specialized adult cell can change into a different type of cell in a type of biological recycling program. It’s not a surprise that this jelly is of particular interest to humans, who have tried to study it to learn from its immortal ways.

Any exceptional animals we missed? Let us know in the comments!