Last month I wrote a post detailing what a reef is and why they should matter to you regardless of where you live. This month I am building off of that idea and talking about something that I get a lot of questions about. Artificial reefs and reef restoration.

What is a reef?

For review, a reef is a bar of sand, rock, coral, or similar material lying below the surface of a body of water. Most people immediately think coral reef when they hear the word reef, but there are many other types of reef. The below images show an oyster reef and a coral reef. They are similar in structure and function, as they both provide substrate for other organisms, trap carbon, and shelter shorelines from erosion and storm damage. 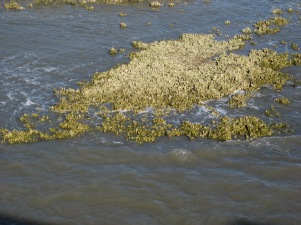 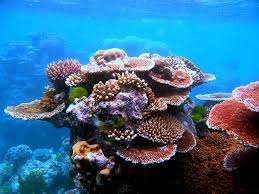 They are also similar in another way. We’ve destroyed most of them either directly or indirectly due to habitat destruction, overfishing, coastal development, sea level rise, and climate change. However, these ecosystems have enormous benefits to humans, such as economic value (fisheries), tourism dollars, and of course food (again, fisheries). As a result, there are local, national, and international scale efforts in progress to try to restore these vital habitats. Many of these restoration projects involve building artificial reefs and attempting to get them to grow.

How do you build an artificial reef?

An artificial reef is a man-made structure that mimics some of the functions of real reefs (or can eventually grow into a “real” reef). To begin understanding this idea, we need to talk about how reefs form.

A reef forms when larval organisms (corals or oysters) settle. These larva are free-swimming and will settle based on chemical cues. For the larvae to survive they need to settle in a suitable habitat. Most larvae do not end up settling in a suitable habitat and will die quickly, which is why corals and oysters both produce tons of larvae in at a time (in hopes that a handful will survive and grow).

Suitable habitat for reef formation is:

Once the organisms settles, it will start to secrete a carbonate shell and cement itself in place. Slowly, over years, it will grow, become larger, and reproduce. If many individuals survive and are able to grow and reproduce for many years a full reef will be established.

Check out these cool videos to learn a little more about settlement.

Through decades of research we now more or less understand what corals and other organisms need to survive. Which means we can try to provide those things and grow artificial reefs. The first question is one of substrate. How do we get a hard surface underwater? Answer- we sink old hard stuff. Examples include decommissioned military vessels (ships, carriers, tanks, etc), old oil rigs, old subway cars, and the list goes on. For a great list of artificial reefs (with awesome photos) check out this post.

Rigs to Reefs:  Rigs-to-reefs essentially gives oil companies the opportunity to modify an old oil platform instead of fully removing it. The idea is that the rig will support marine life as a hard substrate for settlement. This program is active off the California coast and has been met with opposition as it saves oil companies money and allows the to essentially dump or leave waste in the ocean (that the state must then monitor and control). In any case, oil rigs are huge and made of metal so organisms will totally settle on them. 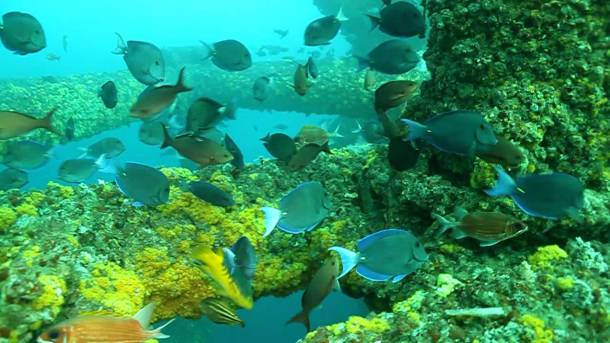 The Reefball foundation: Reefballs are concrete structures that provide both a substrate for settlement and a structure for larger organisms to use as shelter (think lobsters and fish). I’ve seen these structures first hand in Panama, and while they may be a good idea, they don’t all look like the one in the photo below. The ones I saw were devoid of life inside and out, proving that we still have something to learn about where to be placing our artificial reefs to maximize usefulness. 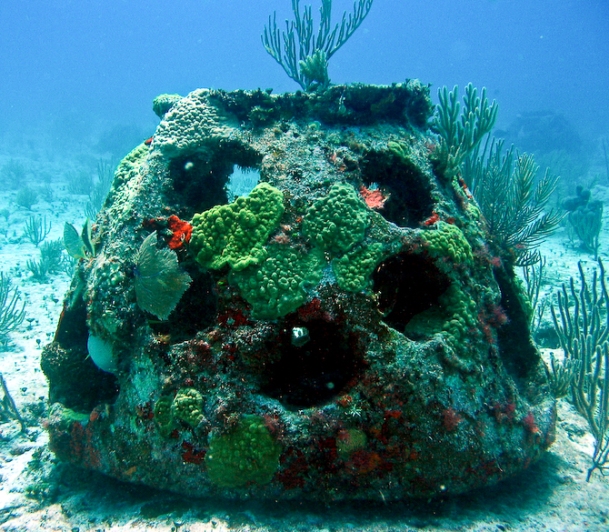 Sinking ships: I don’t have much to say about this one. Check out the video below to watch this in action.

And a documentary about the process:

Obviously you can’t just sink a ship, a tank, or a subway car with all of the parts still attached as many of these things can corrode and end up doing more harm than good. Generally, anything that can be removed gets removed leaving only the hard shell. This is all we want in the ocean anyway, as it provides a substrate for stuff to settle on and live inside. Those are the reef services that we are trying to replicate when building artificial reefs.

Oyster reef restoration: UNC Institute of Marine Science has been working with oyster reefs for decades. On the east coast of the US oysters are a very important fishery and they are arguably more important for protecting our coastlines. However, destructive fishing practices, sea level rise, and coastal development have dropped oyster reef habitats down to around 1% of their historical size. Obviously that has detrimental impacts on the ecosystem, the economy, and the livelihoods of the people who live near the coast. Below is a 10 minute documentary about restoration efforts on oyster reefs in North Carolina.

Problems associated with artificial reefs and restoration in general:

1.) SCALE- This is the big one. We can sink ships or grow and plant tiny corals and oysters as much as we want, but will it matter on a global scale? The answer right now is probably not. Sadly, the scale at which these ecosystems has been damaged is so great that putting all of our resources into rebuilding them at a small, local scale is simply not feasible. It is also not feasible to expand these extremely labor intensive programs to a larger scale (at present). As a result, it is safe to say that artificial reefs and restoration will NOT save our reefs (alone). Instead, we must tackle the sources of the damage. Namely, climate change and local impacts like habitat destruction and fishing practices. The latter two options are relatively east to control and we are starting to do a good job controlling them, but the big one is always going to be climate change. If we don’t change the way we as humans live and alter our values we will not have healthy reefs. We just wont. That said, there are new technologies in restoration that may help slow things down a bit. Here’s an example from Florida:

2.) Artificial reef failure: Not every artificial reef is successful. See my example of reef balls from Panama above. Perhaps the most famous disaster is the Osbourne Reef in Florida. It is constructed of millions of old tires. 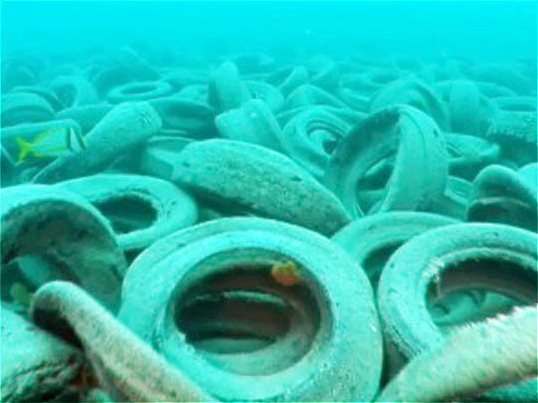 Osbourne Reef was started in the 1970’s as a way to bring fish and corals to the Broward county area. Unfortunately, this artificial reef project failed miserably and left an environmental disaster that is still not cleaned up. Tires were dislodged during storm events and scattered all over the east coast. Massive tire cleanups have occurred as far north as North Carolina. Tires are just not the right kind of substrate for settlement. And anything that does settle is damaged when tires are dislodged and moved around. As you can see above, tire reefs don’t harbor much diversity. Many tire reefs have been placed around the world and almost all of them have failed miserably. Hopefully we’ve learned from our past mistakes and will stop putting tires on the ocean floor. Cleanup of this offshore dump site is still underway and is suffering from funding issues.