“It was as though a friend had suddenly turned into a homicidal maniac,” The Spectator of London reported in what has to be the most colorful description of storm surges published in the English language. That homicidal maniac was the Thames River, whose banks had overflowed on January 6, 1928, a week before the article went to press. As the city attempted to right itself, scientists and politicians got to work on modeling the flood and casting blame, respectively. Newspaper language may have become less flowery in the intervening years, making life more boring for future historians, but the impacts of that flood have trickled down through the decades to set the stage for modern storm surge predictions. 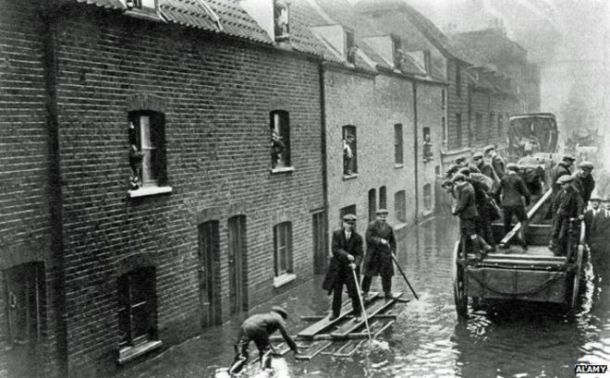 As the Thames flooded its banks, it fractured into countless rivers that filled the streets of poor neighborhoods. Image source.

The 1928 London flood was a complete surprise for its residents. The Thames was already high thanks to heavy snowmelt, and when a high spring tide coincided with a storm in the North Sea on the night of January 6, conditions proved too overwhelming for the river’s embankments. Around 1 am on January 7, the river burst onto the streets of London and into the homes of its slumbering denizens. It swamped impoverished slum neighborhoods, where many families slept in basements that were already vulnerable to flooding, and ultimately resulted in deaths of 14 people. “Most of the victims, let us hope, were drowned almost before they were aware of the peril,” wrote The Spectator. The floodwaters also gushed into famous landmarks such as the Tower of London, the House of Parliament, and the Tate Gallery, where hundreds of paintings were damaged. And in the soggy, dismal aftermath, with an estimated 4,000 people left homeless, the city attempted to figure out how to prevent similar disasters in the future.

Subsequent public discourse initially veered between blaming a) politicians or b) God. “If blame is to be assigned … it must be directed in the main against those who were responsible for the inadequate walls – against the local authorities,” wrote The Spectator. Flooding was generally seen as an issue to be managed by city government, and rabble-rousers wasted no time in arguing that ill-informed dredging practices and/or poor maintenance of the river defenses were to blame. Politicians, in response, threw up their hands and deferred to the big guy upstairs. It was estimated that the flood waters were 11 inches above the 18-foot-tall Thames embankments: how could they have predicted such an onslaught? As the General Manager of the Port of London Authority insisted, “We could not possibly foresee what was going to happen, especially when nothing like it had occurred for a century or more.” These arguments might ring some bells; responses to natural disasters still involve heaping spoonfuls of political scrutiny and existential crises about the power of nature. 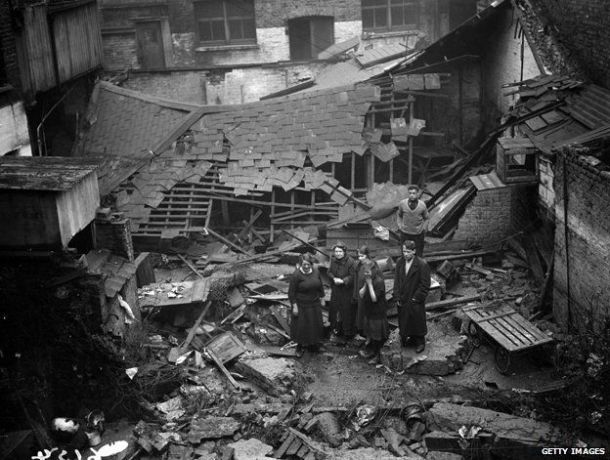 People visit the remains of a home destroyed by the flood. Image source.

Ah, but there’s one more component that we’ve neglected so far- science! There was no undoing the 1928 flood, but surely scientists could predict the next one? Prime Minister Stanley Baldwin convened a conference “to settle what action can, and should, be taken to obviate any recurrence of such […] disaster.” That meeting ultimately zeroed in on the Liverpool Tidal Institute (TI), an entity that had been established earlier in the century to better calculate the timing of tides. As Dr. Anna Carlsson-Hyslop explains in her dissertation on the institute, TI was already well-connected with government institutions and therefore poised to assume work on flood predictions. Their assignment was also convenient for members of the city government, who could breathe a sigh of relief knowing that, having done something to address the flood, they could perhaps avoid messier reform on issues such as impoverished families living in basements.

Before the Tidal Institute could get down to work on flood predictions, they needed a better name for what had happened to the Thames that night. Dr. Arthur Doodson, one of TI’s chief scientists, was the first to introduce the term “storm surge.” The phrase is commonplace today, though it didn’t catch on very quickly among the broader scientific community. Doodson defined a storm surge as, roughly, “dynamical meteorological effects with pseudo periods of six hours.” That is, storm surges were the result of weather conditions that created very fast and strong surges of water encompassing 6 hours from rise to fall. Scientists still define storm surges as rapid increases in sea level resulting from low pressure systems, though the time component has been dropped; 6 hours was characteristic of the Thames system. 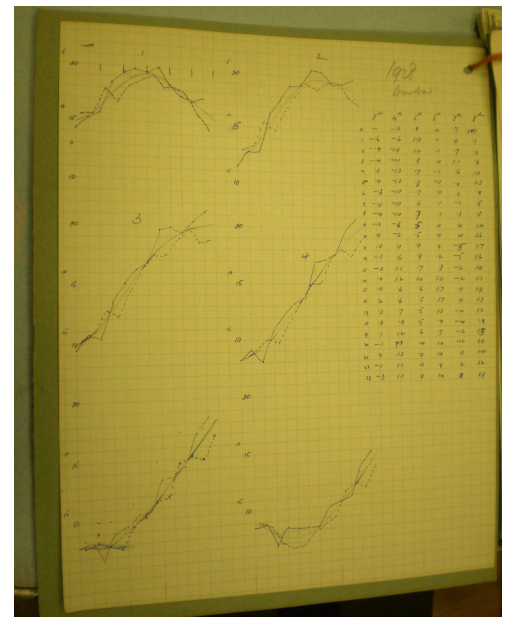 As it turned out, the coining of “storm surge” was TI’s most significant contribution in the immediate wake of the 1928 flood.  Further storm surge research was punctuated by funding arguments, delaying TI’s next government assignment to 1938. By then, the institute had refined a method of predicting tides using residuals. Residuals were defined as “observed minus predicted”: the difference between the actual tide height measured by field gauges and the predicted tide height, which did not account for the impact of weather conditions. Sounds simple enough, but remember: this was the 1930s, meaning that any time TI wanted to obtain tide gauge observations from a specific site, they practically needed a body builder. “The documents were complicated to send back and forth,” writes Carlsson-Hyslop. “[They were] often large and heavy, for example scrolls of tidal gauge data … Gaining access to data was hard work.” Once the data had been hauled to TI headquarters, scientists and computers had to add tidal predictions and calculate residuals, if applicable. (We haven’t veered into steampunk, by the way: computers here refer to a person who computes. TI computers were mostly women.) 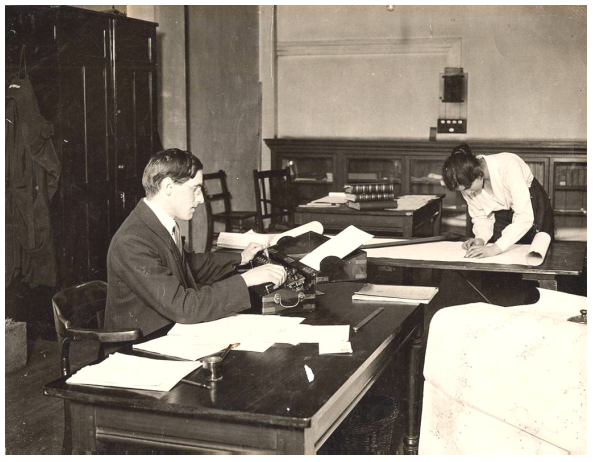 Dr. Arthur Doodson and Mrs. Dennis, one of the computers, at work in the Liverpool Tidal Institute. The photo was likely taken in the late 1920s or 1930s. Image from Carlsson-Hyslop’s dissertation; copyright held by the National Oceanographic Centre in Liverpool.

World War II came barreling through all this math, temporarily redirecting TI’s focus until 1947. At this point, scientist Robert Henry Corkan had decided that the best way to predict surges was to wrangle piles of residuals into a multiple regression. Easy peasy, yes? Corkan’s goal was to develop an equation that used real-time weather conditions to determine whether tides would be higher than normal, possibly resulting in a storm surge. He ultimately settled on a formula to calculate “wind effect” based on pressure gradients in the North Sea. This formula was confirmed by statistical analysis and published as a sort of end-product to TI’s storm surge predictions. With the dawn of electronic computers just around the corner though, the wind effect formula was soon replaced by a brave new world of tidal forecasting.

Storm surge modeling remained tragically relevant to London. On the morning of February 1, 1953, another North Sea storm surge flooded England, Scotland, and the Netherlands, resulting in a staggering 2100 deaths. In response, the UK created government agencies that have evolved into the Flood Forecasting Center, the Scottish Flood Forecasting Service, and the UK Coastal Monitoring and Forecasting Service. These agencies now rely on high-tech monitoring and computing capabilities that would have been unthinkable to the TI scientists juggling reams of handwritten data decades earlier. (The Liverpool TI lives on today as the UK’s National Oceanography Center Liverpool.) And storm surge modeling extends far beyond the UK. The director of our own UNC Institute of Marine Sciences, Dr. Rick Leuttich, helped developed ADCIRC, a system of computer programs that predicts storm surges and coastal flooding.

Storm surges are by no means confined to the pages of history. As climate change brings more severe weather, storm surges will continue to threaten coastal areas. Scientists have developed life-saving predictive models, but society will help determine how often we need those warning bells.

An Anatomy of Storm Surge Science at Liverpool Tidal Institute 1919-1959: Forecasting, Practices of Calculation and Patronage by Anna Carlsson-Hyslop. This article was heavily based on Dr. Carlsson-Hyslop’s dissertation, especially Chapters 4 and 5. The quotes from the Port of London Authority manager, PM Baldwin, and Arthur Doodson are taken from her paper.