Venoms are complex chemical cocktails designed to be actively injected into another organism and wreak cellular havoc (not to be confused with poisons, which need to be ingested). Venoms have a rich evolutionary history, with each independently evolved lineage accumulating new duplicate genes that can then mutate and alter existing proteins to produce an extraordinarily diverse array of deadly mixtures (Sunagar et al.,Venom Genomics and Proteomics, 2014). Today, this great diversity can be seen in many marine organisms, including over 2000 venomous species of fish (Ziegman et al.,Toxins Review, 2015). So, let us take a “Top 10” look at some of the ocean’s venomous heavy hitters!

Note: injuries from venomous animals are extremely rare, and any that do occur are almost always accidental or defensive. So, no fears on your next snorkeling trip, just (I hope) a new appreciation for the incredible adaptations of marine life!

e death of Steve Irwin [ =’( ], and use the barbs tucked within their tails as both a mechanical weapon and a venom delivery system. Sting ray venom focuses on the muscles, and can cause swelling and cramps in addition to any damage from the barb itself. Generally, venom is only released if the animal is extremely stressed, and the rays do not use their venomous barbs when hunting small fish and invertebrates on the ocean floor. Not all rays are venomous, and the ones that are venomous are generally docile, which is why rays are often touch-tank animals in aquariums. Still, if you’re in an area where rays are present, it is recommended to do the “sting ray shuffle” when entering the water!

The tail itself is actually harmless, but the barb is tucked underneath.

Everyone loves coral reefs for their beauty, diversity and tranquility…but

they can also sting! Fire corals are named because they resemble true corals, but in fact they are more closely related to hydrozoans and are part of the phylum that includes jellyfish. Upon contact, the fire coral releases tiny venomous stinging cells (nematocysts) from tentacles on its surface. The venom is not lethal to a human, instead it is  designed to deter grazers, but it will lead to pain and nausea that can last from days to weeks. Fire corals are most abundant in Indonesia, but they can be found at tropical reefs throughout the world’s oceans.

Close up of the nematocyst containing tentacles 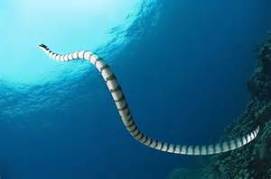 How long the snakes can dive varies with the species, but they all do need air, making venom potency critical to hunting in a narrow time window

Sea snakes are the most aquatic air-breathing vertebrate, with many species never going on land, and are equipped with a paddle tail, large lungs and very potent venom. The venom works to break down muscles and skeletal tissue and rapidly kills their prey. In humans, a bite can lead to cardiac arrest or respiratory paralysis within six hours. Sea snakes are extremely docile, and generally want nothing more than to be left alone, and so they won’t bite unprovoked. Further, they rarely inject venom when they do bite humans, instead reserving their energetically expensive chemical mixture for select prey targets of small fish or invertebrates. Sea snakes generally live in the tropical Indian and western Pacific oceans.

These beautiful fish are native to the Indo-Pacific, but in recent

years they have become a massive invasive species problem for the US east coast. Lionfish have ravenous appetites, out-compete native fish, and they lack Atlantic predators due to their venomous dorsal and pectoral spines containing a potent neurotoxin. In fact, only a few species of sharks have been shown be tolerant or immune to the venom. Though lionfish venom is less potent than their scorpionfish relatives, lionfish are responsible for the third most human injuries caused by marine animals, and are rising in rank as their population soars.

The tail of the animal is not dangerous, but its main body is covered in venomous spines to protect areas targeted by potential predators 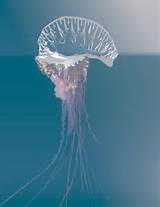 The bell floats on top of the water, and acts as a sail that helps the jellyfish move with the wind as well as the currents, while the tentacles dangle below to catch prey

This is not the typical jellyfish. In fact, it isn’t even one organism! The Man O’War actually consists of a colony of specialized individual polyps that are dependent on their physiological integration with one another. The stinging polyps form the organism’s tentacles and contain the venomous nematocysts, reaching an average length of 10 meters, though some have been up to 50 meters! The tentacles capture any prey unlucky enough to venture too close, such as small fish or invertebrates, and contain a myotoxin that degrades the prey’s muscles. On humans, a sting leaves a whip-like red sore that causes severe pain for up to several hours. Venom can be released even after the animal’s death, with active nematocysts lasting from hours to days.

Near perfect camouflage is great for defense, but even better for swallowing unsuspecting prey whole without spending energy hunting

At last we have reached the world’s most venomous fish. Stonefish are found in tropical reefs, where they use superb camouflage to blend in with the corals or the sea floor, and gulp down anything that can fit in their massive mouths. To protect themselves, stonefish have 13 venomous spines that contain a super potent “all or nothing” neurotoxin designed to be fatal to any potential predators; more than making up for the stonefish’s lack of speed. Stonefish stings have become a relatively frequent human marine injury, and many emergency response centers in developed tropical areas and Australia are now stocked with the anti-venom. 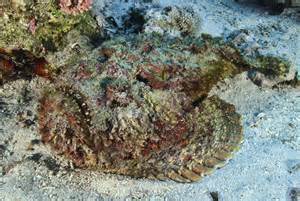 Their beautiful shells make them tempting to pick up

Cone snails have a long, thin needle-like barb that they use to deliver a mixture of hundreds of neurotoxins that are unique to each species. The venom of large fish-hunting species can kill or paralyze their prey instantly. Amazingly, the snails are able to project this barb in nearly any direction, and generally store a second barb in reserve! Cone snails are mostly tropical, but some species are found off of southern California. Human injuries result when they are handled, for cone snails are not conservative with their venom and will usually release a barb under stress. A few species are fatal to humans, causing death anywhere from minutes to hours. To really appreciate this animal, check out this video from Nat Geo Wild. 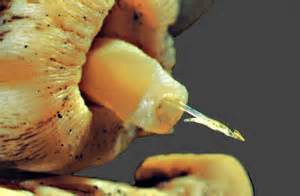 Close up of the venomous barb used to “harpoon” prey.

Here is my personal favorite venomous animal! This guy is tiny, only

7-25cm, but packs a nasty punch. Symbiotic bacteria in its saliva produce a neurotoxin more potent than potassium cyanide, called TTX (for which there is no cure), that inhibits neuron signaling to the involuntary muscles and leads to respiratory failure. TTX is currently the most potent known natural toxin, with only 1mg being enough to kill an adult human, and one octopus has enough to kill 10. The octopus is very shy and likes to hide in crevices in the coral reefs of Australia and the Indo-Pacific, but if agitated it will display bright blue rings as a warning. Recent work shows that the octopus itself is immune to TTX, and that some of the venom is released to the surrounding water and may be able to penetrate the skin of its prey even without a direct bite! (http://www.thecephalopodpage.org/bluering2.php) 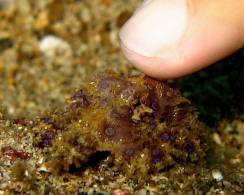 This jellyfish is only 2.5cm from bell to tentacles, but is one of the most venomous organisms in the world. The jellyfish uses a super potent neurotoxin to catch tiny zooplankton or larvae in the tropical waters off of Australia, and is able to kill its prey instantly. Uniquely, its entire body is covered in venomous nematocysts, not just the tentacles. Despite its size, the venom is so potent that a sting can lead to cardiac arrest and respiratory failure in an adult human in one to two minutes. Word of advice, be careful not to gulp down any seawater if you are swimming off of Australia…

The box jellies of Australia come to the podium again, but this time

bringing both size and one of the world’s most potent venoms to the table. By size, I mean 60 tentacles that each have a reach of 3 meters. But not to worry, it only fully extends its tentacles when it is hunting fish, birds, or really anything that will fit in its bell. The venom is a potent neurotoxin mix that causes cells to leak potassium, which disrupts the chemical charge gradients along their cell membranes. The venom is potent enough to cause cardiac arrest in an adult human within two minutes, and each animal is estimated to have enough venom to kill 60 humans, though stings are rarely so severe. But good news: there is an anti-venom if you make it to the hospital, though due to the jellyfish’s near transparency making it difficult to see, it is second only to the saltwater crocodile in marine animal caused human deaths. Again, best be careful and to wear a protective wet suit when swimming off of Australia!

In Australia, it is advised to heed the warning signs…

And so completes my “Marine Venomous Animal Top 10”! There are so many amazing venomous animals in the oceans; this is only a short list of my highlights. Feel free to comment on which venomous marine animal is your favorite, or to add to the list!

And remember, though these animals can be dangerous, with proper respect and precaution they can also be absolutely stunning to witness in nature.