Let me lay some knowledge down on you people–in ancient Rome, the average citizen lived to the ripe age of 24. If I lived back then I’d probably be in the midst of putting my affairs in order and imparting wisdom to my many children, which is frightening because I feel like a functioning adult about 5% of the time. But it’s been like this for most of human history. If you made it to an age where stiffness and wrinkles became an issue, you weren’t saving up for botox or a chiropractor visit—you thanked your lucky stars that you were still alive. But since the advent of modern medicine we’ve found ourselves living much longer, with accompanying increases in age-related diseases. 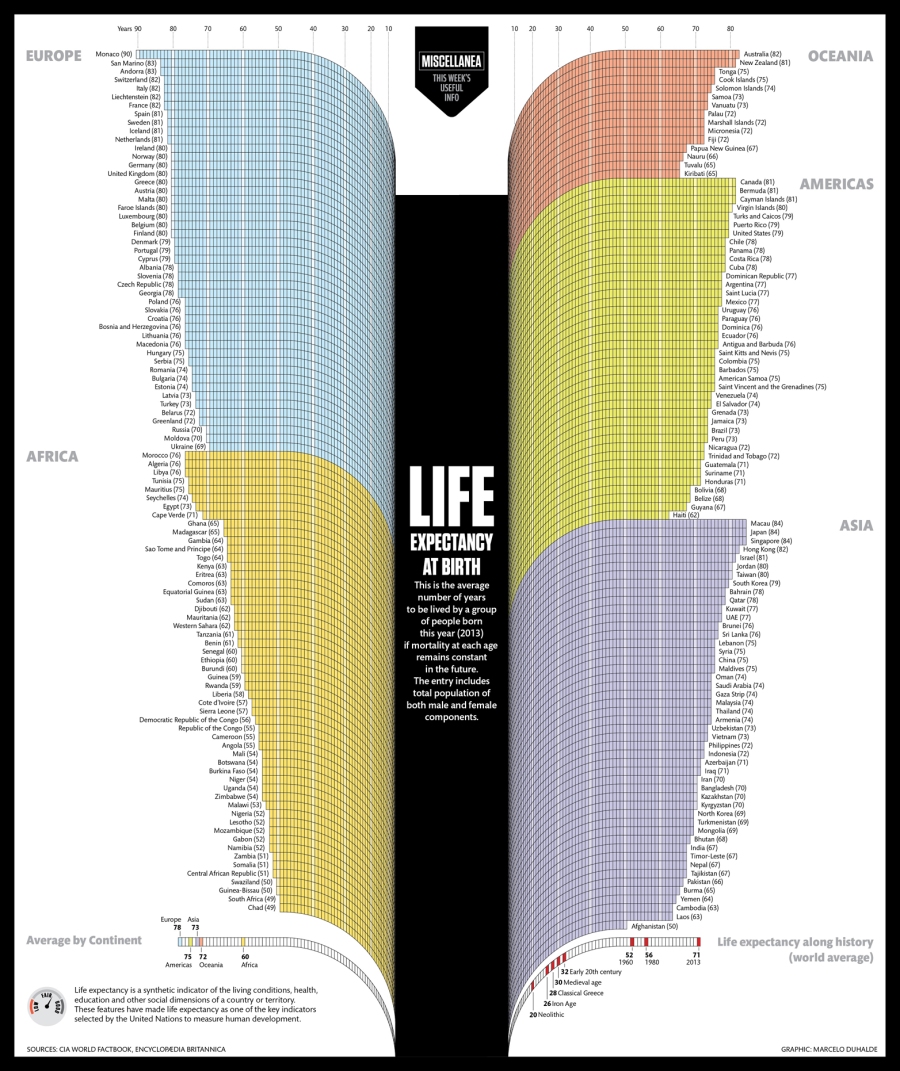 World life expectancies, now and in the past. Monaco, you’re obviously doing something right. By Marcelo Duhalde.

As America’s population skews older and life expectancies creep up into the 80s and 90s, we’ve had to grapple with the relative importance of quality of life versus its quantity. How fulfilling is a long life if your twilight years are spent in and out of hospitals, grappling with neurodegenerative diseases, or physically incapacitated? Many intelligent people have grappled with this question, but I’m going to put my faith in the people I trust most–marine scientists. It turns out that to discover how we can improve quality of life as we age, marine researchers are turning to the long-lived bowhead whale for answers.

Tell us your secrets, oh great whale. And please don’t eat me.

Different whale species have varying life expectancies, with the dwarf sperm whale living to 20 or 30 and the blue whale clocking out around 80. But one whale in particular, the bowhead whale, can live for a mind-boggling 200 years. What makes this truly unique is that the bowhead accomplishes this with little sign of the age-related diseases that are unavoidable for us. Clues from the whale’s genetic code, scientists hope, can be co-opted by humans to increase our own longevity.

These “clues” can be found in the bowhead whale’s genome, so the first step for researchers was to sequence, or read, the entire thing. Each cell in your body contains a complete set of your genetic code, which is made up of DNA and also known as your genome. So, genetic code = genome. To sequence the bowhead genome, scientists took whale tissue, extracted DNA from it, and fed that DNA into a machine that was able to “read” the information encoded in the DNA sequences. Your DNA functions as an instruction manual for everything that happens inside the body, and by “reading” it (which is easier than a book in some ways, since there are only 4 letters—G, A, T, and C) we can discover if the bowhead has any unique instructions in its DNA that allow it to live for so long. A string of DNA that works together to perform a specific function, like creating a protein, is called a gene. Researchers suspect that special bowhead genes related to things like cell division, DNA repair, cancer, and aging might help keep the whale healthy.

I’m sorry about this info dump, I truly am. I just love genetics so much that I can’t help myself.

Researchers plan to compare the bowhead whale’s genome to that of the closely related but less long-lived minke whale and see which genes the bowhead has that the minke doesn’t. They’re already identified some potential genes, and plan on inserting them into mice to observe how they affect the animal’s aging process. It still seems like science fiction to me, but we can actually take a gene from one organism and insert it into the genome of another unrelated organism. The new gene then instructs the new body to do whatever it did in the original organism, resulting in traits as varied as glowing cats and golden rice.

Did you think I was kidding?

This process is controversial—it is used to create genetically-modified foods (GMOs), for instance—but it also give scientists powerful tools to rewrite life’s instruction manual and hopefully treat disease. Someday this same method may be used on humans in the form of gene therapy, which is the idea that a sick person can be healed by inserting a gene that treats their disease into their DNA. A diabetic who can’t produce insulin, for example, may be given a gene that instructs the body to produce it. Many inherited diseases may be able to be treated this way as well. Scientists are just starting to really get their hands dirty with the bowhead whale genome, which is actually available online here for the world at large to peruse. So it might be a while before we obtain the secret to long life, but if nothing else we can appreciate the awesomeness of the whales who gave it to us while we wait.

APPRECIATE THEIR MAJESTY, YOU FOOLS

One thought on “Can Whales Give us the Secret to Long Life?”