Or in other words, do lionfish have ninja skills?

Lionfish are predatory fish, native to the Indian and Pacific regions, that have invaded the Atlantic and Caribbean. See our previous posts about lionfish (Photo Friday,  Marine Monster Mash, The Great Debate: Predators vs Lionfish, and Who’s ‘Lyin” about Lionfish?) for more information about the invasion and the negative impacts of lionfish. One of the main problems with invasive lionfish is that they are eating so many native reef fish.

Are lionfish such successful predators because they are invisible to prey?

A recent study published in PlosOne by O.M. Lonnstedt and M. I. McCormick (2013) investigated this very question.

Fish use both chemical and visual cues to sense their surroundings, similar to the way we use sight and smell. An important way fish use these cues is to identify a threat (like a predator) so that they can respond appropriately (hide, swim away, etc). Researchers wanted to see if prey fish responded differently to the chemical and visual cues of two common predators, compared to their responses to lionfish. They also tested if fish could “learn” to identify threats.

The prey fish were juveniles of a type of damselfish called the blue green chromis (Chromis viridis). When a damselfish is injured, a chemical is released that signals to other damselfish to display “anti-predator behaviors” such as reducing their activity or finding shelter. In this study, there were four groups of prey. Three groups were “taught” that each of the three predators (one group per predator) are threats by being exposed to the cues from the predators (visual and chemical) combined with the alarm-signaling chemical. These groups are referred to as the “experienced” prey. The remaining group was “inexperienced” and was not taught to identify any of the three predators as a threat.

The three predators used in the study were :

Researchers observed how the prey (both experienced and inexperienced) behaved towards these three different predators, and also if the prey survived the encounter.

Prey fish learned that the freckled hind was a predator and a threat.

Prey fish could identify the chemical cues of the zebra lionfish, but not the visual cues.

When exposed to both (chemical and visual) cues together, or the chemical cue alone of zebra fish, prey”experienced” with zebra lionfish showed more anti-predator behaviors and also had higher survival than “inexperienced” prey. This is an interesting finding showing that prey fish were able to learn that zebra lionfish are predators and threats, but could not learn to identify them by visual cues alone. I guess they don’t sport those stripes, spines, and fan-like fins just as a fashion statement! 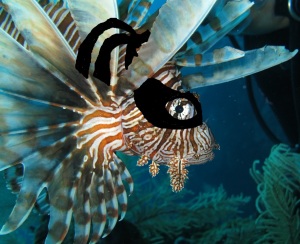 Yes. Neither the “inexperienced” or “experienced” prey were able to learn to identify lionfish as predators or threats. Regardless of experience, prey fish didn’t even seem to react when exposed to a lionfish. Needless to say, this didn’t bode well for the survival of these prey fish. All of the prey were eaten by the lionfish within the first 24 hours, most within the first 3 hours.

These results suggest that lionfish are “invisible” not only due to their unique appearance (similar to that of the zebra lionfish which was visually-imperceptible) but also due to a unique chemical cue that cannot be detected by potential prey, even if they have had prior experience with lionfish.

This study was conducted with fish all from the Indo-Pacific, the native range of the lionfish, but the results can give insight into the lionfish invasion occurring in the Caribbean and Atlantic. These lionfish have evolved to be super stealth predators, able to hunt completely undetected by their prey. This is probably why they have been such successful hunters in their invaded range, and also why they have the potential to cause so many problems on coral reefs. Fortunately, humans are much better than reef fish at identifying lionfish. We can reduce the impact of the lionfish invasion by removing lionfish from reefs with spears or nets. You can join the fight against these “Ninjas of the Caribbean” by spearing lionfish yourself, competing in lionfish derbies, or even just ordering lionfish off the menu!

4 thoughts on “Are Lionfish Invisible to Prey?”