Wave energy may be very important to the renewable energy industry as more traditional green energy sources meet more and more opposition in the political and economic arena. In this post, I’ll show you how ocean waves work, and some of the ways people have been attempting to harness wave energy for use by humans in the form of electricity.

An ocean wave behaves similarly to any other mechanical wave you may encounter, such as a sound wave or a wave you might make with a jump rope or slinky. The key element to any wave is the propagation of energy. That is, the wave serves as a means for energy to move from one place to the other. It’s important to recognize that it is the energy that is being moved, and not the matter. Take a look at the first GIF above. You can see that if you follow a particular particle (in this case, the red ball, but you can also think about a piece of driftwood in the open ocean), the particle does not move with the wave. The motion the ball undergoes is cyclical in nature, moving a little vertically and a little horizontally. Some ways in which we harness wave energy (the three ways I’ll talk about in this post) involve capitalizing on the vertical motion of the wave. It is the result of the gravitational force we all feel and is relatively constant as long as the wave motion is constant. You can also see this movement more clearly in “wave tanks.” These are large tanks that scientists use to study the fluid mechanics of wave motion. You can see in the GIF below a standing wave with a fairly obvious up-and-down motion.

(GIF created by author from youtube video from un: froudedude)

If we want to use these waves to harness mechanical energy from the ocean, we use what’s called a Wave Energy Converter, or WEC. There are many different types of WEC’s because there are many different companies continually inventing better solutions and technologies to accommodate specific size waves without harming the marine environment. 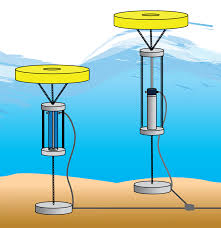 The most common and simplest type of WEC is called a point absorber,  made up of a buoy, a generator, and a mooring. In the image to the left, you can see the (yellow) buoy, the energy conversion mechanism in the middle, and the mooring holding the whole apparatus to the ground. As the ocean wave carries the buoy upwards, the conversion mechanism stretches and converts the mechanical energy to electrical energy. The electricity can be produced by means of a steam driven generator, or even a simple magnetic induction process. This electricity is either stored on site, or directly connected to “the grid” for residential or commercial use. One company which utilizes this particular technology is called Ocean Power Technologies. Their WEC, the PowerBuoy, has been tested off the coast of Hawaii. These types of WEC’s are fairly popular because of their simple construction and low environmental impact as compared to methods with moving parts (such as those utilizing turbines). 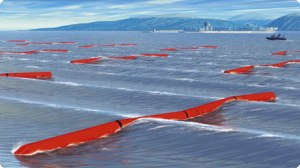 Another type of WEC is the wave attenuator. It works similarly to the point absorber mentioned above, but instead of being a single point in the water, it is typically a long line that runs along the direction of wave motion. The Pelamis Sea Snake, invented in the UK, is one example of an attenuator. The snake is made up of relatively short pieces connected at joints. The joints function as point absorbers, moving up and down with the motion of the waves, and with the help of an internal generator, electricity is produced. A couple of Pelamis’s snakes are currently being tested off the coast of Portugal, but they are not currently in a large-scale commercial stage.

The last type of WEC for this post is the Oscillating Water Column system. This mechanism is typically built along the coastline rather than in the open ocean, but some (like Our-Energy’s version) are indeed floating, just like the point absorber. As a wave crashes moves toward the coast, it eventually crashes up into the internal space of the WEC. The air  that was inside this space is then forced upward to the top, creating a lot of pressure. There  is a turbine generator at the top of these mechanisms in order to produce electricity from this pressure. These structures tend to be large-scale, and could impact the coastline if the environmental effects are not adequately assessed. These three types of wave energy conversion mostly utilize the vertical motion of the waves. There are other types, though not as common, that take advantage of the horizontal propagation of wave energy. As with the development of any new technology that interacts with our environment, care must be taken in order to affirm that we are minimizing negative impacts. If you are interested in the environmental ramifications of these and other ocean energy devices, take a look at the report compiled for Congress by the DOE a few years ago.

6 thoughts on “Wave energy conversion: the physics and the applications”