Instead of doing my homework, last night I sat down and watched the entirety of the Bill Nye vs. Ken Ham debate/showdown. For those who avoided the whole thing, Bill Nye (a famous science educator) and Ken Ham (a Christian author who believes that Creationism should be taught in schools alongside evolution) agreed to meet at the Creation Museum in Kentucky to debate the question “Is creation a viable model of origins in today’s modern scientific era?” The whole thing lasted about 2.5 hours and included a lot of powerpoint slides, as well as some great shots of Bill Nye’s bow tie. You can still watch the debate here for the next few days, if you’re so inclined. I’m going to admit right off the bat that I went into this biased–as a kid, I loved Bill Nye’s show, and as a scientist I love how passionate he is about science education. But still, I tried my best to watch the debate with an open mind, giving credit where credit is due (best accent goes to K-Ham, for sure). 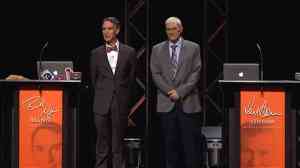 Pre debate photo-op. Blazer: who wore it best? Bow tie: fab or drab? These, people, are the important questions.

I thought that the central tenet of Ken Ham’s argument, that there is “historical science,” based on what the Bible says about the creation of the earth, as well as “observational science,” which is basically science derived from things we can observe in the present day, to be a thought-provoking idea. I disagree about the validity of “historical science” right off the bat, but I thought it was interesting how Ham posited that science shouldn’t draw conclusions about the past from what we see on Earth today. He cast doubt upon everything from radioisotope dating to plate tectonics, which are extremely widely accepted concepts within the scientific community. Ken Ham said that we can’t determine how old the Earth is based on data from these sources, since we weren’t around when the Earth began and don’t know if scientific principles worked in the same way then. In short, Ken denies the ability of science to do anything but observe what is happening at the present moment.

It’s kind of a good point. How do we know–really, truly know–that something has occurred according to a specific set of processes if we didn’t see it happen? We can’t know, not with absolute certainty. But by Ken’s standards nothing is known, and as my roommate Devika so aptly put it “according to [Ken’s] reasoning, you can’t say with absolute certainty that the sun will rise tomorrow, even though you think it will based off of previous patterns (i.e, it always does so).” But it makes no sense to live in a world with no certainty–there’s no point to much of anything if nothing can be “known.” We have to trust that the natural laws which let planes fly, miners drill deep into the Earth, and which erode our mountains are constant if things are to make any sense at all.

On another note, I’m taking a course in science communication this semester and it really hit me today how great of a science educator Billy Nye is. He did a great job of (1) taking complicated concepts and distilling them into digestible explanations, (2) tying science back to people, whether through a story or through talking about the researchers themselves, and (3) being human! Bill Nye didn’t seem like he thought he was smarter than everyone else (though he did use the word “troubling” to describe Ken Ham’s views a lot), but rather seemed keen to whenever possible urge everyone watching to pursue science and experience the “joy of discovery.” We need more researchers–not celebrities, but normal scientists–who are willing to seem funny and flawed in order to help people connect with them (and through them, their research). We sometimes expect people to be persuaded by the strength of our data alone, but that tactic doesn’t always work with people who haven’t been trained to see the significance of p < 0.05.

I’m glad as well that Bill Nye stated repeatedly how science and religion are not incompatible. Ken Ham’s rigid creationist doctrine is antithetical to a lot of known science, but this doesn’t mean that being religious makes you a bad scientist. On the contrary, the one can help you to take greater joy in the other. However, I do not believe that Ken Ham’s rigid doctrine, based completely on belief in a single book and without any cogent scientific evidence, encourages children to become good scientists. I went to a Christian school as a child, and I think Ken Ham would have approved of my science education there. I remember, for example, hearing about the “Antediluvian” period (before Noah’s flood) and learning that the Earth was literally created in 7 days. We were not encouraged to look at the world around us and question things, but rather to tacitly accept what was told to us as fact, no matter whether or not it made scientific sense.

Some scientists are saying that Bill Nye shouldn’t have even agreed to debate with Ken, since in doing so he legitimized Ken’s views to an extent. I do think there’s something to that argument, but at the same time I admired how Bill Nye approached the debate not just as a way to prove Ken Ham wrong, but to also encourage kids who might be watching to get out there and discover how awesome science can be for themselves. Without being influenced by people like Nye as a kid, who knows if I would have ended up a scientist at all? While this is my own personal experience and as such can’t be generalized to everyone, I do know that learning the creationist interpretation of science sapped me of my desire to do science at all. It wasn’t until college that I rediscovered how fantastic it can be to see the world through the eyes of a scientist. If this debate encouraged any kids to discover that for themselves, I think it counts as a success.

It’s SCIENCE!!! I.e, metal melting inside an electromagnet. Proof of nothing, but extremely cool. Get on my level, people.

5 thoughts on “Bill Nye the Science Guy versus Ken Ham the Creation Man: Who Won the Debate?”