This article is a guest post by ODU undergradaute Ben Maxie. Ben works in the Barshis Lab and studies the evolution of stress tolerance in corals and other organisms.

The 2010 BP Deep-water Horizon oil spill was an environmental tragedy of immense magnitude. Five million barrels of toxic crude oil were leeched into the Gulf of Mexico, and disrupted marine life for thousands of miles in every direction. The cleanup effort was also of reckonable size; over two million gallons of oil dispersant were used.

The majority of this dispersant was a chemical known as Corexit, made by Nalco Company. Corexit works by making oil solidify and clump together, sinking the oil. Corexit is likely involved in the missing sunken oil; the idea is that Corexit allows oil to be taken in by certain bacteria, effectively scrubbing the oil from the area. This dispersant by itself was known to be extraordinarily toxic after being invented in the 1960’s, so the formula was later changed to be less dangerous to marine and human life. 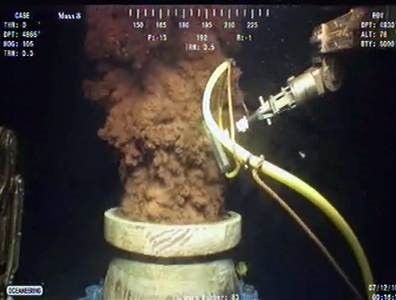 Corexit being pumped into the Macondo Well. Image Source: AP

However, a 2013 paper showed that oil and Corexit when combined are up to 52 times as toxic as oil alone. I spoke with the lead author of the study on the toxicity of dispersants and impacts for the gulf ecosystem.

“Corexit 9500A® as well as many other oil dispersants act as oil solvents increasing the solubility of the oil components with water (sea or freshwater). With the increase in solubility there is an increase in bioavailability and then toxicity increases because now the components of the oil mix can enter inside the animal,” explained Roberto Rico-Martinez, of La Universidad Autonoma de Aguascalientes. “The problem with Corexit 9500A is that mixing with oil increases the toxicity up to 52-fold! Oil by itself is not toxic.” He said that finding lethal concentrations of oil in the open ocean are quite unlikely (and not environmental relevant), even during the 2010 spill.

His results conflict with the EPA’s shrimp toxicity tests, which he suspects may have to do with the EPA testing “a different species, mysid shrimp. This is the reason you need to do extensive testing with several species. For some the results might vary; some would be more tolerant than others to the different types of oil and oil dispersants.”

Corexit/ oil mix in a rotifer. Image from here

“However, EPA decided to use Brachionus plicatilis acute toxicity tests to assess the health of the Gulf of Mexico samples taken after the oil spill. Therefore, they should have been better informed about the toxicity of oil and Corexit 9500A® to B. plicatilis, before recommending to use this species for the assessment. Again, I want to emphasize the need for further research on this field to be better prepared for the next oil spill, that I hope would not happen in a long time.”

His results are also at odds with the EPA’s on fish. “Again, EPA report is with a different species, silverside fish, and a different type of oil, Louisiana Sweet Crude Oil vs Macondo Well oil (the oil from the actual spill) that I tested,” said Rico-Martinez.

When asked if Corexit use should be stopped or limited, he replied: “Yes! At the very least the use should be limited. At the time of the spill some ecological organizations recommended Dispersit® over Corexit. The truth is that we know very little about oil dispersants in general and that they might represent until now the best strategy we have combined with mechanical devices to stop the spreading of the oil after a massive oil spill.  Bioremediation then comes with introduction of native bacterial species that can degrade oil and other strategies like cleaning of marine birds individual by individual, etc.,” said Rico-Martinez.

“The thing is that there are many questions unanswered about the use of oil dispersants and about the Gulf of Mexico Ecosystems. Some researchers and of course many oil companies still hold the idea that the systems is ‘too big to fail,’ whatever that means. Let’s not forget that they said the same about the US Economy in 2008.”