I don’t study fish. It’s one of my limits. I don’t study anything with a face. Or cells. So when I first learned the word “fisheries” I threw it into that chum-bucket of knowledge I’ve grown accustomed to knowing the existence of, but essentially ignoring. But there’s an aspect of fishery study that I connect with on a socio-political level – fisher’s knowledge research.

This field has grown and evolved greatly over its lifetime going through stages of rapid expansion, but also devolving relative unimportance, depending on how much the scientists at the time valued local fishers’ knowledge. At its core, fisher’s knowledge research hinges on being able to glean data not from fancy instruments or a scientist’s observations, but from the local stakeholders whose livelihoods depend on knowing where certain species of fish are at any given time.

At the University of Delaware, there is currently a study attempting to model the thermal habitat dynamics of pelagic forage fish, namely the butterfish species. Butterfish are causing a little trouble in the northeast, as they are very susceptible to by-catch during squid trawls. That means that while fishermen are trying to catch squid, butterfish end up caught in the nets unintentionally. This becomes a problem if the fishermen catch enough to reach the fishing limits of this protected species before they’ve caught enough squid. Dr. Oliver at the University of Delaware and several other collaborators are attempting to model the presence of these fish in order to help fishermen minimize this ‘bycatch.’ Their model is presented in the figure at right, but if you know anything about maps, you might be able to see a problem here. Each pixel, or “area of spatial resolution” afforded by the model, is about a mile across. When Oliver’s team ventured out to test their model – in a pixel identified as boasting high densities of butterfish – they caught nothing. 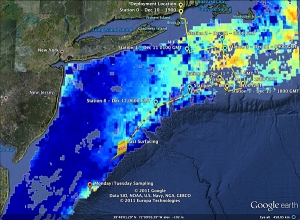 Before you get sad-

Luckily(!) they had brought a resident fisherman along. He let them carry on a bit, but after a while suggested they move over to another section of the bay. The researchers were surprised to find loads of butterfish, even within the same pixel in their model. The local fisherman accompanying them took them to a location rife with the butterfish that to the untrained eye would have seemed exactly the same as the other locations.

If this seems circumstantial, let me give you another example.

The North Carolina Wind Study was conducted over the last several years in order to determine the feasibility of offshore wind development in our Outer Banks and to identify certain prime locations for this development. Part of this study entailed investigating use conflicts in this region. This means nixing areas that are already in use by groups like local shareholders (fishermen), the Coast Guard (boat traffic), the National Park Service (visual pollution). The ‘spatial grid resolution’ also became a problem in this project. If a group denied use in a certain area, that entire pixel would be rejected in the study. The local fishermen, however, came up with a solution. Because of their extensive knowledge from individual experience, they were able to narrow down the specific areas of each pixel where the fishin’ was good, but leave everywhere else open. This didn’t come without a cost: most of these areas are considered the “family jewels” because they have been passed down from generation to generation, but the scientists in this study were able to reach a compromise with these local stakeholders. As a result, they were able to dramatically improve the ‘spatial resolution’ of areas included in the study.

I like this method of study for many reasons, but for one in particular: it both creates and relies on relationships between people. It’s so easy to sit alone in the lab (or on your boat) and conduct scientific research about the ocean. But most of us aren’t ocean people. We didn’t grow up on the water, among the communities birthed from a marine lifestyle. I couldn’t tell you where to find the best crabs any more than the fishermen could tell you where to find the atmospheric sciences section in the science library annex on campus. But there’s a certain value to the interdisciplinary work not just among academics, but among scientists and the people affected by that science. We talk a lot about science outreach here, but I think this is science outreach in the rawest sense – recruiting the people with the most to gain from scientific discoveries in their area to aid in those scientific ventures, resulting in community cooperation and self-ownership.