This past weekend I traveled to the 43rd Annual Benthic Ecology Meeting in Jacksonville, Florida. This years event was hosted by the University of North Florida. If you haven’t heard of them before, check them out. They have a nice new biological sciences building and they are doing some cool research! This was my first conference as a member of the UNdertheC blog team. I had been to several major conferences before, but this was my first attempt at live blogging and really trying to integrate science communication into my conference agenda. After nearly 8 hours in the car, we finally arrived at the conference. 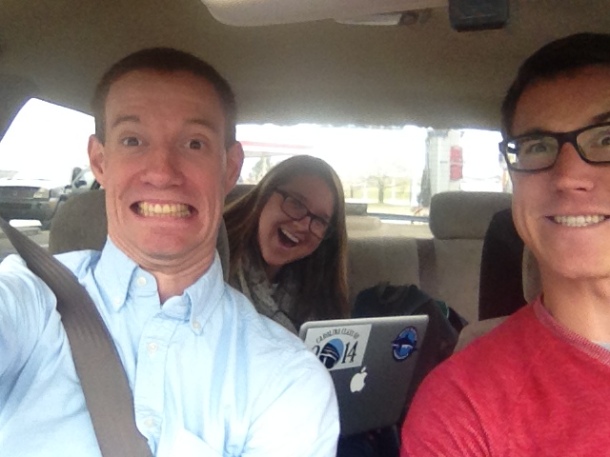 We have done this feature at every conference one of us has attended. Here are the top 5 things I learned while at the conference:

According to the official conference booklet, 67% of all oral and poster presentations were given by students. As a conference attendee, I would say that it was safe to assume that students outnumbered faculty by at least 2:1, if not more. There were students everywhere. I’ve never been to so many student talks. This conference is not ASLO Ocean Sciences, it’s smaller, more personal, and less overwhelming. It offers students (both undergraduate and graduate) a great platform for being introduced to a conference and for giving a presentation to a large group of peers without feeling extremely overwhelmed. As someone who gave their first major research presentation in front of a room of the most well known faculty in my field (International Coral Reef Symposium), I would say that coming to Benthics first would have been dramatically better. Plus, since most of the attendees are students, it is a great way to meet colleagues in the field and discuss ideas without being overly intimidated. If you are a marine science student and you have never presented at a conference or want to work on your presentation skills, I suggest that you give Benthics a try!

2.) There is room for science communication at hard science conferences

Benthics is a conference for scientists. We all go meet somewhere warm and present our research to one another. The point of a conference is dissemination of knowledge inside the field. I’ve always wondered where exactly outreach and communication fit in at these types of events. This year, Benthics has a session called “Brevity is the Soul of Wit” during which a presenter would have 5 minutes (and 5 slides) to introduce an idea. They would then field questions and facilitate discussion with the audience for 10 minutes. The session featured 3 talks, all of which were about outreach and science communication. First up, were a group of upstart grad students from Texas A&M Corpus Christi who have put together a facebook/Youtube based program designed to get people interested in science. It’s called “Scienceisfunny”, you can find them here and here. Their goal is to show the general public that scientists are people too. That we make mistakes, have setbacks, and can be funny. The public perceives scientists are overly smart or smug, they think scientists talk down to them and they become disinterested. These guys are trying to reverse that trend. They are just getting started and could use some support both on Facebook and Youtube, so go give them a look.

Two more talks in this session were given by the awesome folks over at Beneath the Waves. Beneath the Waves is run by graduate students in marine science and focuses on bringing cool science to the masses via film festivals. Scientists create shorts (3-5 minutes in length) and submit them to BTW, who select the best submissions and present them at film festivals all over the country (and world). The Benthic Ecology Meeting is often one of the largest events that this group puts on each year. This time, they have two 90 minute film festivals at the event, allowing all conference goers the opportunity to see some of the best marine science based films of the year. It was a great success, the room was packed for both showings and the crowd was really into it. Some of the filmmakers were even in attendance, including students from UNC Institute of Marine Science and members of the Pawlik lab at UNCW. If you are in the region, BTW is putting on a film festival in Beaufort, NC on April 5th (details here).

In addition to their film festival and competitions for scientists, they also have a competitions for younger students called “Youth Making Ripples.” This program allows K-12 students a chance to make their voices heard. Students make short videos (<5 minutes) about a marine science topic and submit them to the organization as part of the competition. It’s a great way to get student interested in oceans, teach them how to use media and film, and make them more aware of ocean issues. It’s a great program and it can be used to meet state science standards. If you or someone you know is a K-12 science teacher it may be worth a shot. Contact them for details, they are super nice and happy to help!

I learned all of this outreach related stuff in a 45 minute session! It was great. BTW is a great success story for those of us interested in science communication, blogging, and outreach in general, so it was great to hear from them and see what they are all about. The group discussion at this session was quite interesting. There were a few skeptics in the audience, but overall there was a lot of support and tons of interest in getting involved in such activities.

3.) Live Tweeting is hard, but worth it.

I had never live Tweeted a conference before this one and I was concerned. I had been to several conferences before and had difficulties even understanding what half of the talks were really about. While I was live Tweeting I realized that I was doing a much better job of seeing the forest through the trees. I was looking for the big picture in a talk and I usually got it. The details may have been confusing at times, but I was able to see what the real impacts of the work were and tweet about the major findings and implications. It was actually a great way for me to focus and learn. As I was Tweeting I started to realize that many other people were either checking Twitter for updates or live Tweeting themselves. I was able to see a brief summary of some of the cool talks that I missed out on! In addition to that, people outside of the conference were checking in on the goings-on. It was great to see so many scientists take an interest in what was going on. Twitter may not be the most effective tool for outreach outside of the field, but it is certainly a great way for all of us to broaden our scientific horizons and keep ourselves abreast to new research and new results.

4.) Presentations get better with time

The more you present, the easier it gets. Last time I presented I was extremely intimidated and very nervous. It went poorly. At Benthics the room may have been bigger, but it felt smaller. I was more confident and it went much better. Everyone prepares differently, but my advice is this: Do not memorize everything you want to say word for word. It just makes you nervous. You are up there to tell people about something you already know like the back of your hand. So tell them. Keep it simple, show them a few key results and tell them why it matters. If you want to memorize a few phrases or key points, great. If you try to memorize it all you just put unnecessary pressure on yourself. If you mess up that is all you will think about and everything will fall apart. Practice talking through everything a few times so that you can identify areas that are difficult and then work on them. And don’t be so stressed, you know your stuff. Go tell people.

I sat in on a special 30 minute broader impact session and it was interesting to say the least. It seems that no one is happy with the way broader impacts are being interpreted at this point. NSF review panels (who are scientists within the field being reviewed) seem to have very high expectations. They want novel and high impact ideas from everyone, even people who have a well established and already successful broader impact program. The reason given for this was that NSF is looking to advance science, to fund new and exciting, cutting edge stuff. We all agree that is great, but broader impacts are merely part of the application. The science being proposed can be cutting edge even if the broader impact is an old favorite. If that old favorite (ex: training many grad students and undergrads, and doing K-12 outreach) is already successful and working, then why punish the researcher because they didn’t come up with a new (and potentially less successful) idea. I’m not sure where I stand on this yet, but I understand the frustrations of both sides. The way scientists review one another perhaps needs a bit of an overhaul. Time will tell.

BEM 2014 was a great time. Thanks to UNF for hosting and to all of the presenters, students, faculty, and scientists who presented! Well done everyone.