In honor of Halloween, we would like to highlight some marine “monsters.” These monsters are the most frightening type of all. They are taking over new regions, rapidly increasing in numbers, and eating everything in their paths. These species are… marine invaders. 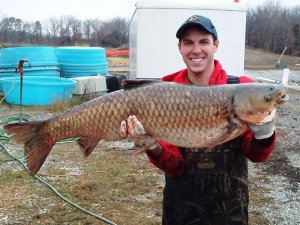 Carp aren’t scary are they?  They are simply big, docile fish that feed on detritus, plants, and plankton. These voracious invasives were introduced in several places throughout the U.S. as a means to control algae or nutrients in farm ponds and sewage treatment lagoons.  Flooding allowed them to move from their self-contained basins to larger water bodies, such as the Mississippi River. They have since radiated and are now knocking on the door of the Great Lakes.  See the video below  to understand just how much of an effect these fish can have on a body of water.

Scientist have found four grass carp in a tributary to Lake Erie that have lived their entire live cycles in that system. More work needs to be done to prove that there are actually viable populations in the system, but it seems as though it is only a matter of time. The invasion has the potential to alter the trophic dynamics of the Great Lakes tremendously.